Join-Up: Of Submission and Trust

Posted by Firn Hyde on Saturday, 25 October 2014 in Horses in Ministry 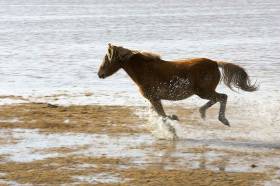 There is absolute silence but for the beat of the wild horse’s hooves and the huff of her breath as she moves at a jerky canter around the round pen. The man at the centre of the pen makes no sound, but to the horse every smooth movement he makes is speaking. The horse’s jaws are clamped shut, upper lip poking out as she runs, but her white-rimmed eyes and high-flung head scream silently.

The trainer keeps his eyes locked on hers, his shoulders squared. In her own body language, he says, Move away. She tries to flee, but all she can do is run around and around the pen. Sometimes he steps in front of her, making her wheel around, the staccato stamp of her rapid hooves breaking her fast rhythm for a moment before she resumes her laps of the pen in the opposite direction.

But as the seconds tick past, the mare starts to relax. She starts to realise that the trainer hasn’t hurt her, and begins to recognise the syllables of a language she understands in the way he holds his body. Gradually, her head lowers, strides lengthening as her back muscles relax. Previously buried in her tossing mane, her ears start to rise, then tip towards the trainer. He watches the horse intently, keeping the pressure on so that she keeps moving. At last, after a few minutes of running, the mare’s lips move as her jaws grind in the rhythmic motion known as a lick and chew. It is the final sign of submission, and the trainer’s cue to act.

Instantly, but smoothly, he looks away from the mare’s eyes and turns aside so that one shoulder faces her. His shoulders relax, all the lines of his body softening as he changes his body language to say, Come to me. The mare stops, turns to face him with her ears pricked sharply towards him, then flicking back and forth as she wonders what to do. She takes a hesitant step forward, then another, then stumbles into a walk towards him until at last her trembling muzzle touches the wrinkled denim of his shirt. For the first time, this untamed creature stands beside a human being, and she does it willingly, unrestrained.

Such is the small miracle that is a successful join-up. It was the world-renowned Monty Roberts who first spread the idea of join-up, a theory that was at the time quite striking: that a human could communicate with a horse in his own language, and with it persuade even a wild horse to willingly come to the human. Ever since, thousands of trainers and horsepeople all over the world have learned join-up or a similar technique until for many it has become part of a routine. Often successful in establishing at least a little trust between man and equine, join-up has become just as famous as the man who first named it, ever since Roberts went into the wild and convinced an untouched mustang stallion to come to him out of his own free will.

Watching a successful join-up, one cannot help but see how so many of us are like wild horses. Terrified at every little sound, lost in our own society, we run from everything that startles us and trust no one. When God or His children try to reach out to us, we flee; if our flight is checked, we rebel against them and fight for all that we are worth. We batter ourselves against the walls of our round pen until we are raw and bleeding, but we would rather run ourselves to death than surrender and accept His presence.

But God is not like the horse-breakers of long ago who would fling a saddle onto an untouched horse’s back and try to ride him half to death with their spurs in his sides. He will never force us to come to Him, because He wants us to be His children, not His slaves. His boundless love means that He wants us to come to Him of our own free will. So He comes to us with patience, with love, and in a language that each individual understands best. Sometimes He has to allow us to go through trials and tribulations. We might even feel like He’s pushing us away, sending us out to run blindly around our round pen (Acts 14:22). But then we realise that even as we were running, He was standing there speaking to us in a language so familiar that we didn’t know it was Him talking. We see the love in His eyes and the gentleness in Him even as we run from Him. We learn how great He is, how much more powerful He is than we are, how unconquerable and mighty He is and how puny and helpless we are against Him. So we submit, but our fear is trimmed with joy; we submit to Him not as slaves under the whip of a driver, but as obedient children under the gentle hand of our great Father (Romans 8:15).

And once we submit to Him and acknowledge His greatness and confess to our sins, He welcomes us into Him with open arms (Matthew 11:28). So we come to him in full knowledge of what we do and with no restraint; we come to Him willingly, with love, with joy, with a little fear, but with a trembling trust. Like join-up, turning to Christ does not instantly make us complete; there is a long road ahead and much training to do before we can realise our full potential. But it establishes us forever in the Kingdom of God, and plants the seed of a trust in us, a trust that will grow so mighty that we will place our entire lives and everything we are and everything we love in His merciful, scarred and gentle Hands.

Oh, how He loves us. Glory to the King. 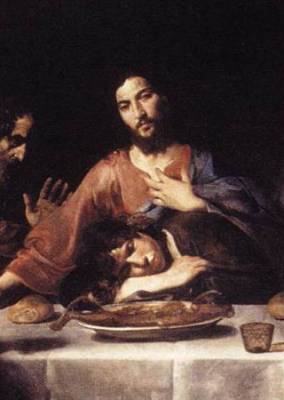