Posted by Firn Hyde on Tuesday, 23 September 2014 in Horses in History 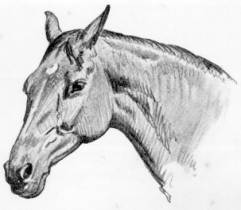 Moreuil Wood near Amiens, France, 30 March 1918. Warrior is pretending to be brave. He quivers under his rider in short bursts, his neat, black-edged ears pricked forward. General Jack Seely runs a stained hand down the gelding’s sweat-stiff bay coat, feeling the jump and shudder of the big neck muscles. In response, the horse slashes at the ground with a forefoot and snorts. The gesture is a challenge, and it gives the General the stab of courage he needs to make up his mind.

He turns to his troops with a rallying smile. “Charge!”

The gelding knows what the words mean; he rises briefly on his hindlegs, slender legs striking out. The men of the Canadian Corps cheer at their mascot, their symbol, their inspiration – the horse the Germans can’t kill. He has pretended to be brave for almost four brutal years now, filled with gunfire and bloodshed, and he makes the men hope that the Germans can’t kill them, either.

The General knows that that cannot be true; he has seen the Germans kill far too many young men already. But he knows that there is only one way to win this decisive battle, and it’s a risk he has to take. He claps his heels into Warrior and the thoroughbred plunges forward like a bullet from a Webley revolver. The men of the Canadian Corps bellow and 1400 horses sweep over the open ground, hooves splattering in the mud and chaos of the battlefield. Machine guns roar all around them, the thin wail of bullets filling the air. The General forces himself to ignore the screams of wounded men and horses that drop out of the ranks as they gallop on; he locks his gaze between Warrior’s ears towards their target – the enemy-infested woods. The gelding does not hesitate. He pushes out his nose, snaps out his legs and accelerates. All at once the woods are upon them and Warrior flings himself through the bushes and into the shadows, into one more battle, kicking and snorting and sweating and plunging, pretending to be brave… 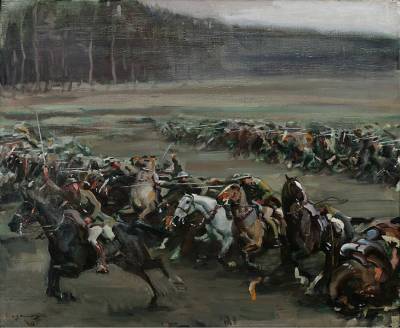 Isle of Wight, 30 March 1922. The roaring sound of many voices falls deafeningly on the General’s ears, but this time there are no screams of pain, no shrieks of desperation. This crowd is cheering, wild with excitement, whooping encouragement to the field of horses tearing down the track towards the finish line. A mass of flashing coats and churning muscles, the horses throw themselves over the steeplechase fences as they thunder down the last stretch. And in the lead runs a powerful little bay gelding, who leaps the fences with an unmatched fearlessness. The other, younger horses sprint to catch up, their jockeys yelling encouragement; but the little bay remains utterly undaunted. He flounces over the finish line in an easy first, tossing his head until his black forelock is flung back from his little white star.

The delighted crowd nearly carries the General into the winner’s circle towards his horse, who is draped with flowers. The General wears a small smile; he walks quietly up to the gelding, reaches out a hand, lays his palm against the smooth brown cheek. Warrior turns his head to look at his owner, and pride swells in the General’s throat and prickles at the back of his eyes. It has been four years to the day since the desperate charge at Moreuil Wood that saved Amiens and was essential for the Allied victory. Almost half the horses and many of the men died in that charge, but here was Warrior; now fourteen years old and bursting with life and health, as evidenced by winning this point-to-point. The Germans couldn’t kill him after all.

Indeed, they could not. Having survived countless battles, being trapped several times under the burning beams of bombed-out stables, and dug out of the nightmarish mud at Passchendaele, Warrior returned safely to the island of his birth once the war was over. He and his owner and breeder, John Edward Bernard Seely 1st Baron Mottistone – known as “General Jack” or “Galloper Jack” in the war – remained inseparable until Warrior was eventually put down in 1941 at the grand age of 33. He had become a celebrity in Britain after the publication of the General’s account of his experiences, entitled My Horse Warrior and later Warrior: The Amazing Story of a Real War Horse. He has become even more of a celebrity 100 years after the beginning of his service in the war, having been posthumously awarded the PDSA Dickin Medal. This medal is known as the “Victoria Cross for animals”, and has been rewarded to only three other horses: the valiant police horses Olga, Regal and Upstart.

Warrior could not understand what the war meant or what he meant to the men around him; all he knew was to do what his rider asked, and he was one of the great horses that would do it with all of his considerable heart. But to the men of the Canadian Corps he was more than a horse. He was a symbol of the hope that they would survive the brutal, bloody, muddy tragedy that was World War I.

God used Warrior to inspire the men that served in the Corps. He is an example of how God can shine a light into even the darkest and most desperate times of our broken, fallen world, and how He can use anything for His purposes. If God can use a small bay horse to inspire an army and later a nation, how mightily He can use each one of us! 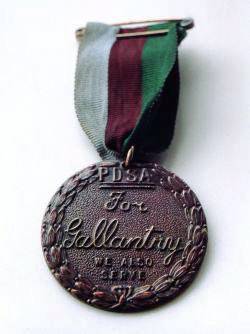 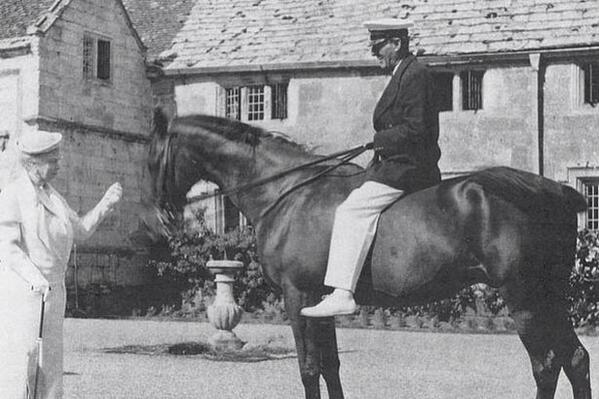 Queen Mary With Warrior And his rider Jack Seely At Mottistone During Cowes Week, 1934

Posted by eQuest For Truth on Saturday, 24 May 2014 in Uncategorized 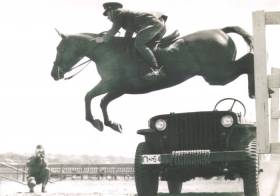 In celebration of the sacrifice made by men (and women) to defend the United States:

We're posting a collection of pictures from the days when horses were used in the U.S. Calvary.

We hope that you enjoy and have a safe Memorial Day celebration. 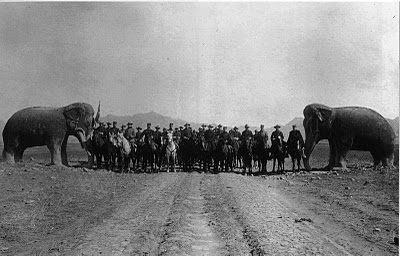 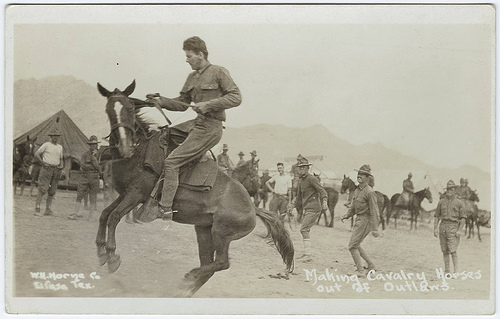 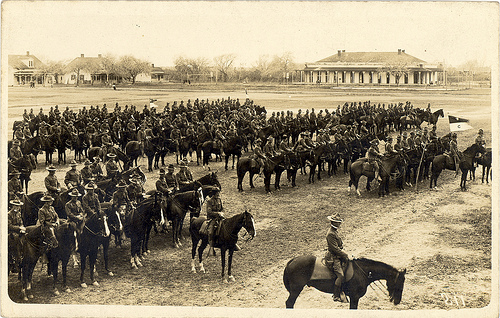 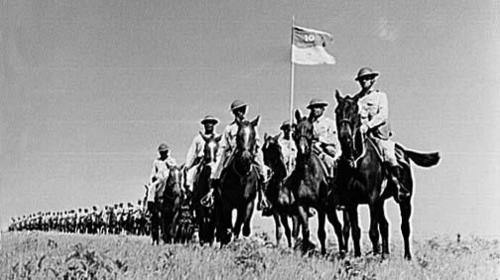 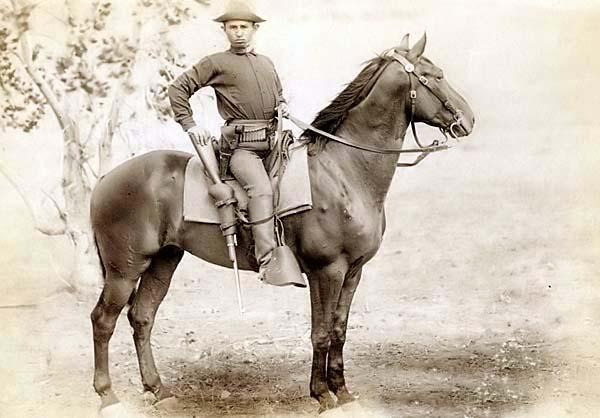 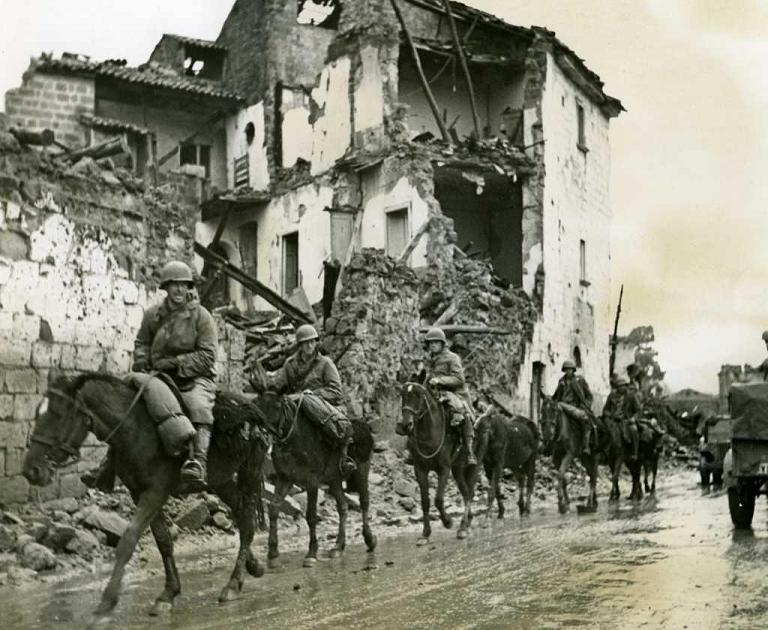 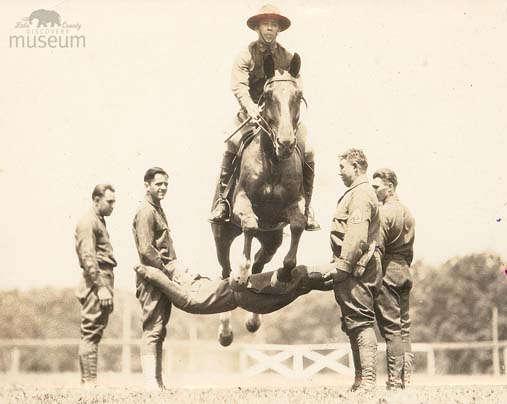 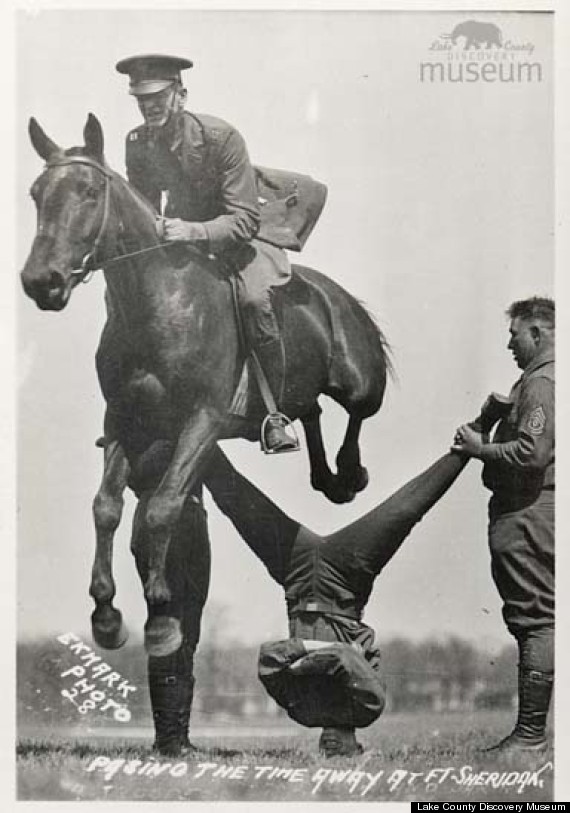 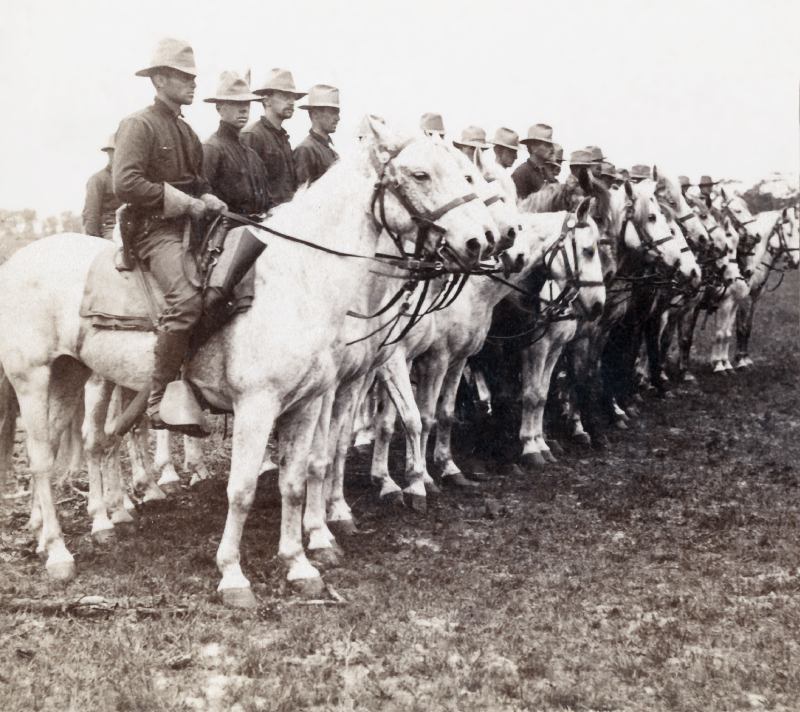 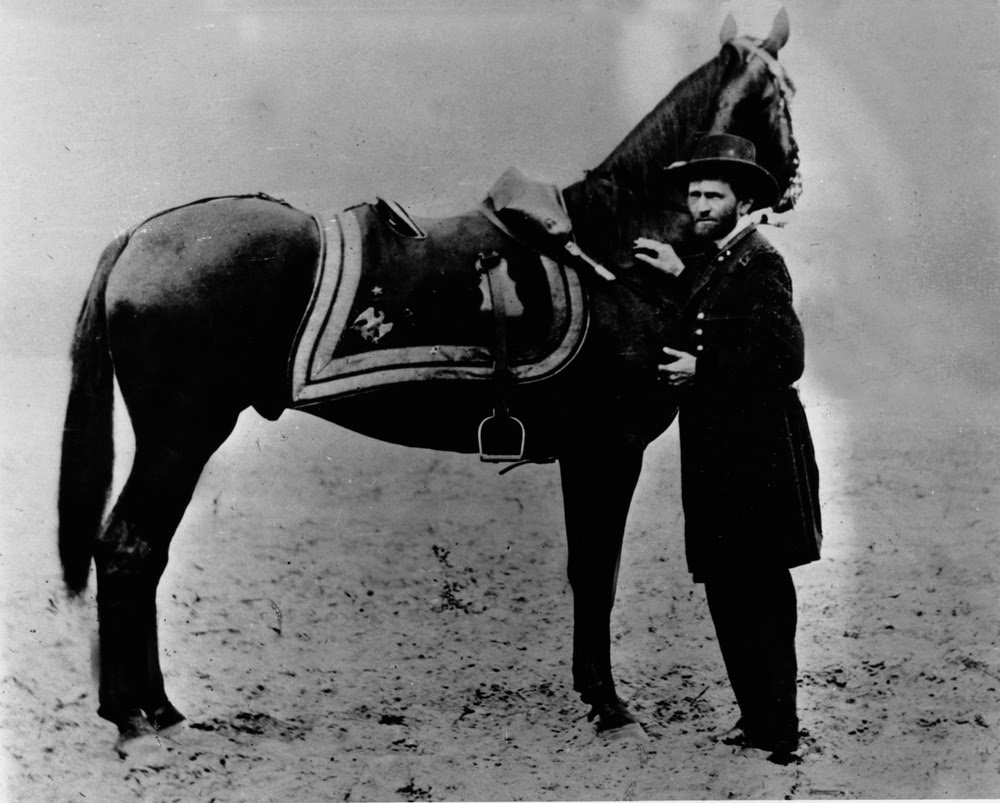 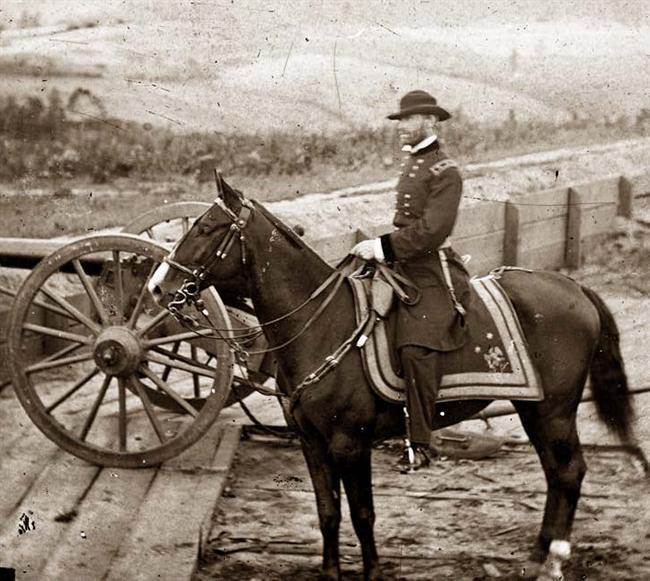 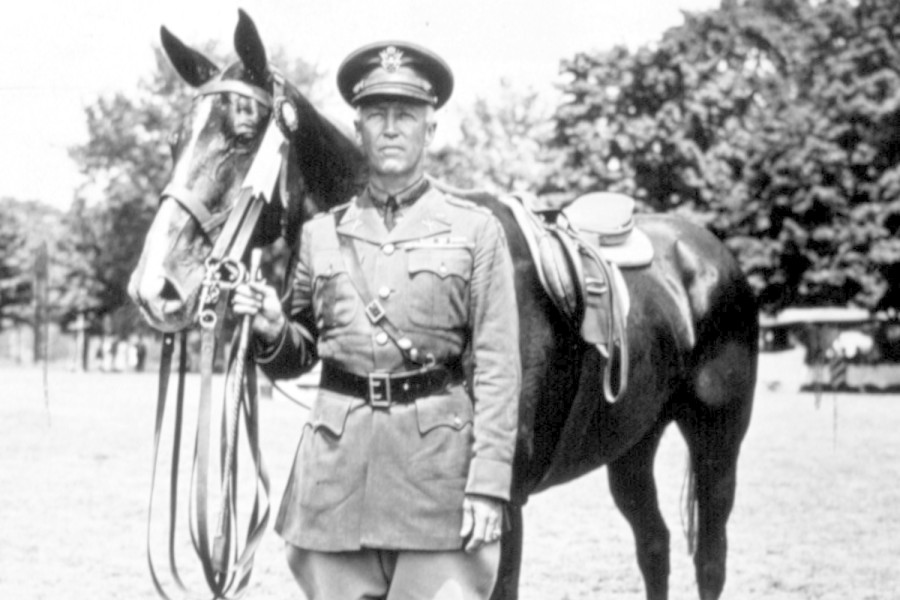