Posted by Rebekah Holt Derr on Thursday, 08 December 2016 in Quest For Christ 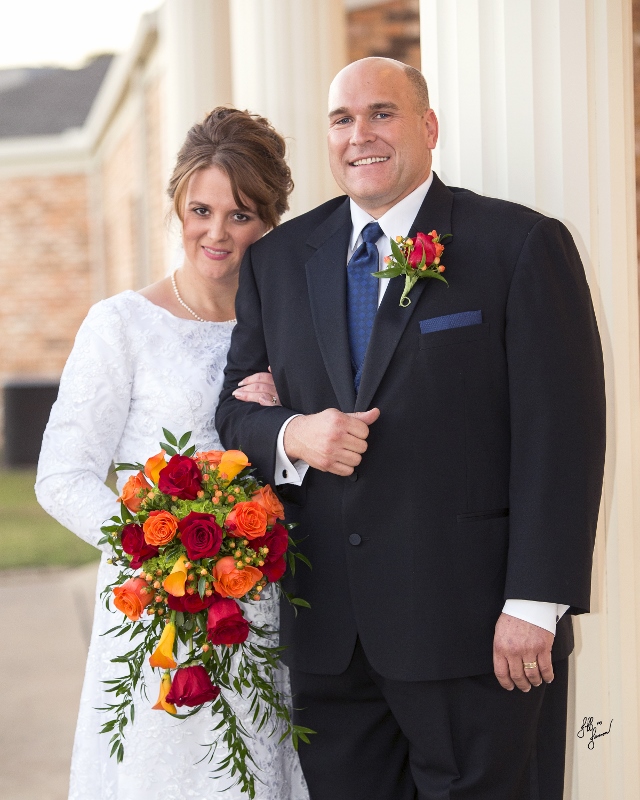 Yes, God has orchastrated this marriage between John Derr and myself.

It has been a time of rejoicing, thanksgiving and wonder for both my husband and myself! November 11, we exchanged our vows. Today we still marvel as we recount all the years of God's preparation and the events that led to our marriage.

God was our Matchmaker

Nothing is by chance. All my life, I have desired to be a wife and stay-at-home homemaker and mommy. Yet--the 20s passed me by, and I reached my early 30s. I began to try to adapt to the realization that singleness might have been God's plan for my life. Things like buying a house, trying to make a financially sustainable income was the sorrowing eliment of reality I was facing.  The idea of "gutting out life" by myself was a challenge, though I believed God was enough and I needed to focus on His work and learn the secret of continual contentment in every stage of life.

In May 2016, I was offered an opportunity "out of the blue" to interview as a District Representative for Senator Bob Hall. I was surprised as a political job had never crossed my mind for a way to earn funds. However, I was thrilled at the prospect and God blessed me to work for Senator Hall, Texas' most conservative Senator and a very bold Christian.

As a District Representative, I was able to put to work my background in marketing, writing, communication and even ministry.  I got to meet so many wonderful people! I lived in a fish bowl, in a way, and was fairly thrust into the public sector in East Texas. 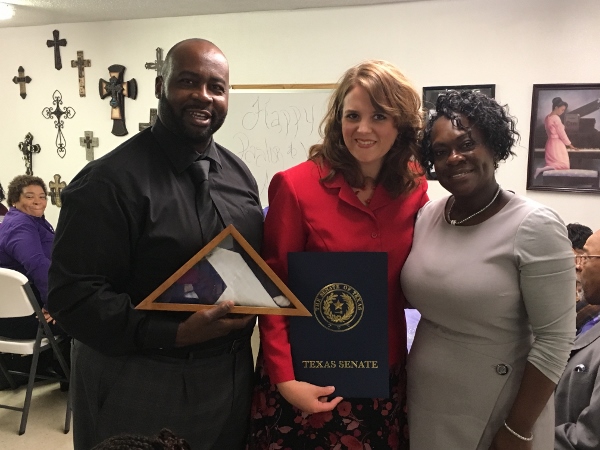 Presenting a Certificate and Flag on behalf of Senator Hall (Oct. 2016)

Through this job, I met John Derr. 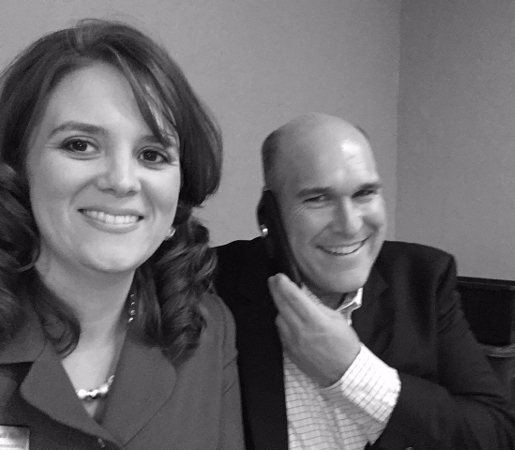 We have quite a funny beginning--it was entirely the Lord that allowed John the persistance to pursue a woman who was in retreat and highly guarded! Before I even had given John "a thought"-- he did his "background check" and incidentally, eQuest For Truth was instrumental in his pursuit. I was a "hard nut to crack." It was the consistant, strong love for the Lord in John's communications that first caught my attention. Then there was his persistant interest and his meeting with my Dad and family (without my prior knowledge) to let them meet him and obtain their blessing to court me! His involvement in ministry and service in the church. Then the kindness, the humor, the gentleness, the evident love being offered and the remarkable constant confirmations of all things essential in doctrine and lifestyle -- I finally realized that to say "no" to John would be rejecting God's will for my life. To be so cherished seemed unreal and a completely new "thing" to have to learn to "accept." It has been like finding that "best friend" you always desired and could never find; he is truly my best friend on earth and the greatest guy to spend the day with. 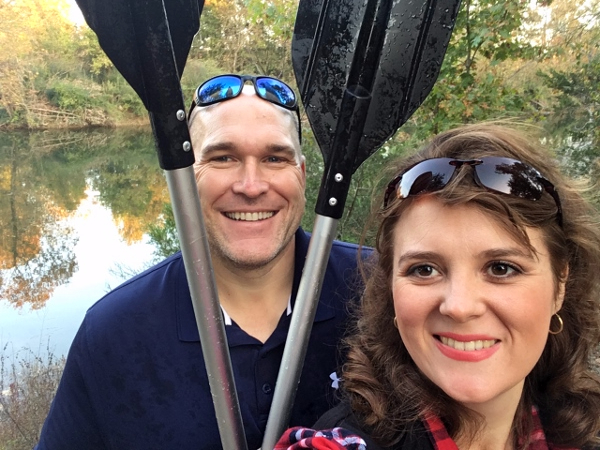 For those "hard core romantics"--yes, John did kneel when proposing--though we still laugh concerning the setting and all the interruptions of "real life." I took "lunch" at the office and inbetween the men coming in and out to repair the A/C unit--John asked me to be his wife. Even right after the "romantic" event of getting our marriage license, I had to rush to a social event on behalf of the Senator!!  :) One day we'll share our story in more detail. Yet--that's for another day.

In becoming Mrs. John Derr, God has also fulfilled my desire to be a stay-at-home wife with a husband that desired a wife with that vision.

It is worth the wait 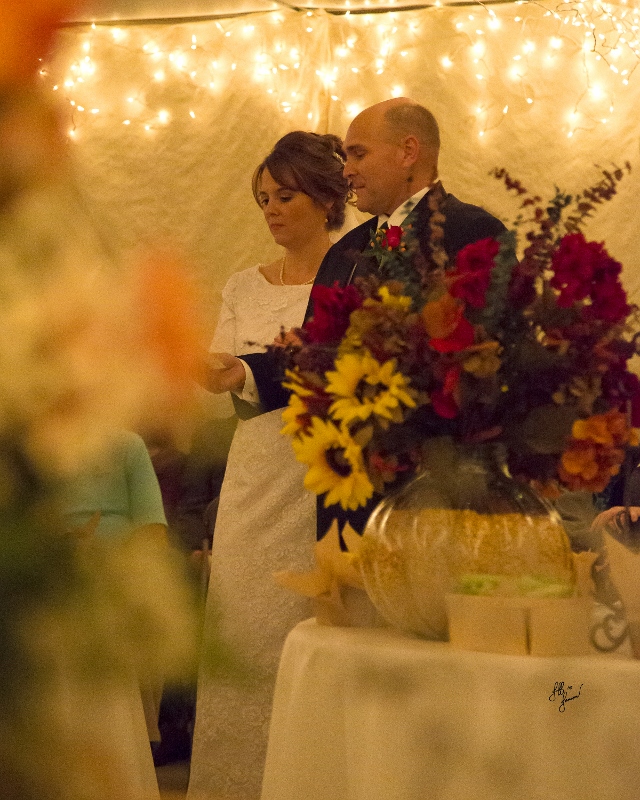 Singing at the Reception, Photo by: Jeff Janson

We desire to encourage other Christians who are single and still waiting--that are perhaps struggling with the whole singleness issue and wondering "what God is doing with my life". God's plan is much bigger and more beautiful than ours. It is well worth waiting for and not getting ahead of the Lord.

I was "Sweet early thirties" and "never been kissed".

John was faithful and kept himself for me even longer--early fourties.  What a gift he gave his bride in that.

It is a beautiful story of God unfurling the next "game plan" for two Christians who need each other to accomplish what God has planned for their lives.  We were each serving the Lord as single people, still desiring to be married and then God brought us together. By the Lord's enablement, we had been seeking the Lord concerning a relationship that would lead to marriage. It was simple, God's will was very plain and we were able to recognized each other as God's pick with no wavering or second guessing.

Thanksgiving 2016 was an exciting time of rejoicing in what God has done in our lives and understanding in a new way His goodness and provision.  I believe Christmas 2016 will also have a new revelation and depth in our lives. Yet, those years of waiting have made the fulfillment of this God's plan for the "here and now" to be more special. I think I value John more in having observed men in the workplace. How rare it truly is to find a God-fearing man that does not waver in the face of adversity and "give up" in the long wait. May God help us to remain faithful.  We both know that marriage and being married is not an easy row. It's wonderful--but it's work and self-denial. It's pouring out and denying self to become one. Yet, with Christ as the center--we have no excuse to fail and every reason to succeed!

Merry Christmas from Mr. and Mrs. John and Rebekah Derr 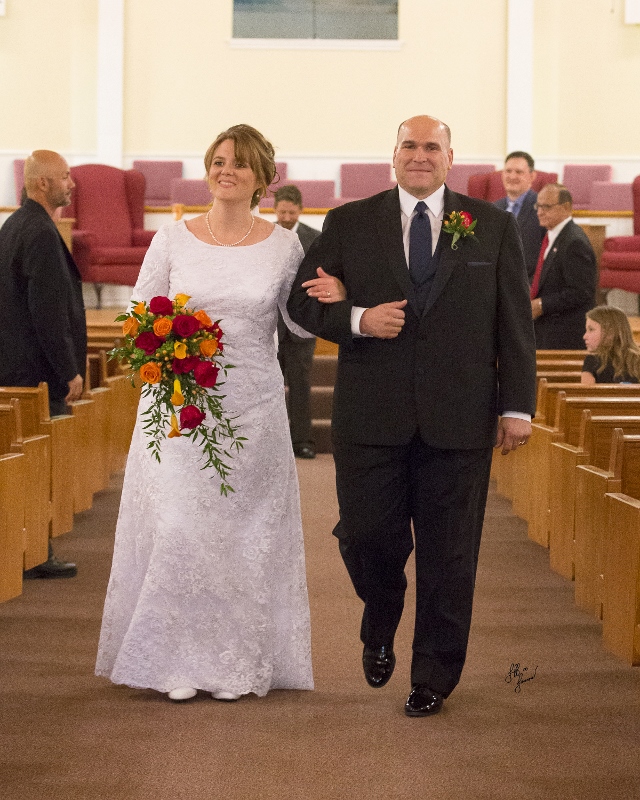