God Used a Horse...To Express His Love For Me - Foaling Story

Posted by Rebekah Holt Derr on Tuesday, 16 June 2015 in Horses in Ministry 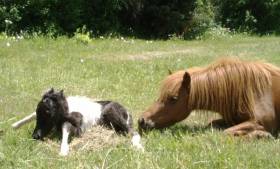 To Express His Love For Me 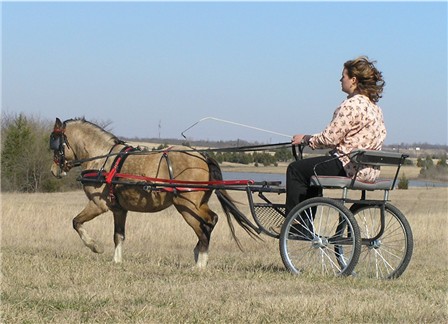 Rebekah with her American Shetland Stallion, Bucky in 2004All these were mine as I looked at the firstborn of my prized buckskin American Shetland stallion. All year I had waited for this specific foal. When it came to the crucial moment of delivery, I had proven totally useless to assist the laboring mare and in some ways, had ignorantly overlooked the “signs of trouble”.

How could I have done such a thing? I had been there with her! I had been preparing myself through reading, talking to other breeders and the veterinarian.  I had read horror stories about foaling situations with ponies. I was diligent to try to study up on the subject of prevention of a bad foaling situation. The responsibility of helping dystocia cases was a worry that endured through the whole foaling season and kept me checking the mares around the clock for weeks prior to their delivery. But despite all my efforts, when it came down to it, I still “missed the boat.” The foal died.

With trepidation, I sought my veterinarian for help. Tell me what to do next time. What can I do? I have so many more mares set to foal out.  He told me to not be afraid of assisting the mare and sent me home with palpation gloves and sterile lubrication.  The vet also told me, well, in all honesty, due to the placenta removing like Velcro from the uterus with every contraction, there was a very tiny window of time to save a foal in a dystocia case. Horses have a very quick delivery (or rather should!) and with every contraction, the placenta and uterus comes apart progressively. Our 20 minute drive to the vet would have likely been too late anyway…by the time the mare could be hauled, etc., etc.  It would have still been up to us, the owners.  Plus, this filly was 3 weeks overdue. The foal was large for a first time mare.  The mare would have had to have help even if the foal had been in the right position. And the fact the foal was coming “crown first”, the vet suggested it could have been an indication she was not wholly healthy.  Later, we traced the culprit to be fescue toxicity and indeed, the symptoms of an overdue pregnancy and dystocia all coincided. 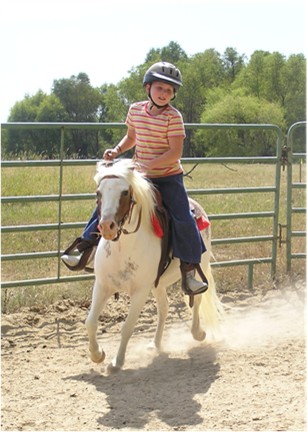 Bonnie and Mary, 2004That night, I once again pulled out the foaling book and fortified my “foaling kit” box. Sleeping restfully was impossible. I felt like a bad steward of what God had given me charge over a beautiful small herd of American Shetland ponies.  How was it possible I had failed the first time out and neglected even to heed my conscience that kept pricking me that something was “wrong” before it was too late? I mourned my ignorance and lack of experience. It was not just a mistake—it entailed a life and loss. This filly was a prize—a well-marked bay tovero with a dishy head the very first foal by my beloved Bucky and Bonnie. What a loss of time, life, money, preparation, energy, effort. Bonnie was thankfully going to heal up alright with some 3-4 times a day care and high powered medication to fight infection and inflammation. However, due to the trauma, the veterinarian said she would likely never be able to carry a foal again.

From then on, fear and dread gripped me as I watched the bulging stomachs of the remaining expectant broodmares.  I found myself praying repeatedly to God, please help me!  But despite a peace knowing God did hear me, there was a fear of a repeat situation and a true concern I would possibly fail again.

Like a hen, those mares were hovered over! Ruby and Dee were next. 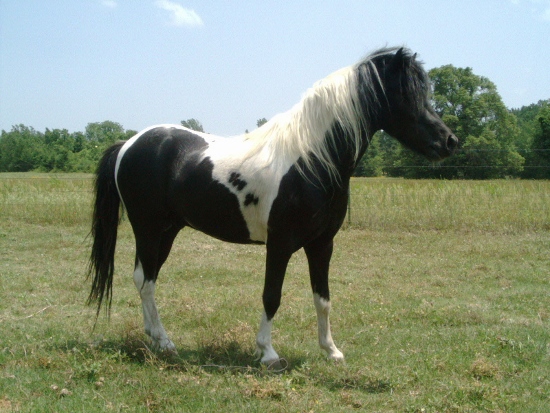 Ruby and Dee were veteran “no help needed” older mothers that liked to foal late at night or in the wee hours of morning.  They were inseparable like two little old-fashioned ladies that were always seen together. Their world was pretty settled without a care. Despite my anxious hovering, they just munched casually on their grass heedless to any greater concern than an occasional swish at a fly.

My vigorous routine of “around the clock” checkups started with the first signs of their “bagging up”.  They were both expecting foals by our homozygous black tobiano stallion, Ryan. However, I had read how even good mares could still have “problems. These were our family favorite mares. To have them in a difficult delivery or possibly lose their foals (who were always some of the best of the crop), would indeed be a devastation from every angle.

The day arrived and Dee made her approach toward “any moment” foaling out. That night, I kept her up close to the house. With a full moon shining through the blinds of the window by my bed, 1 am, 2 am, 3 am, 4 am rolled by only to reveal her marching on foot along the fence line and whining to her pasture buddy who oddly didn’t stay close to her through the night. I knew enough about Dee’s patterns of foaling, she could “go” any moment…why did she wait? Yet, dawn broke, still no foal and Dee’s evening activity had merely left a worn path bordering the cross fencing. I turned her lose and down the pasture she trotted gleefully to join Ruby.

The morning wore on with occasional glances down toward the end of the 40 acre pasture where Ruby and Dee grazed.  The pasture, though narrow and long, was treeless providing a clear view with binoculars at the far end.  As these mares always foaled at night, I expected another worrisome night of broken sleep.  Yet, around noon, walking to the front window overlooking the pasture, I parted the sheers and peered out through binoculars—my heart stood still.

Dee was in labor! 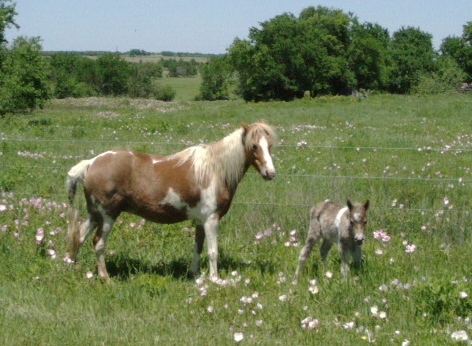 Dee with her one hour old "Dusty", 2004With all the panic surging with the urgency of needing to be on hand to “save the foal”, I dashed on a pair of rubber boots, ran to the barn to grab my kit and jumped in “Brownie” our 1989 brown Chevrolet standard shift pickup.  With a racing heart, I shifted Brownie into 2nd and as I approached the laboring mare, I attempted to “quietly” barrel down the dusty driveway!  I arrived in time to see a blinking, breathing, beautiful robust silver dapple tobiano colt laying in a carpet of clover and primroses. Dutiful Dee “spoke” to her colt in soft, fluttering of her nostrils with gentle, deep sounds I’ve only witnessed by mares to their newborns. It is the tenderest and most loving sound any animal could make.

Oh, he has a paint! And look at those white stockings! And a little star on his forehead! Awww! Oh thank you Lord, thank you Lord! Aw, Dee, aw, he’s so cute!

As my heart poured forth in ecstasy (and yes, I did “talk” to the horses many times!), I glanced over to Dee’s buddy, Ruby who never was too far away.

To my astonishment, the little red mare, who celebrated over the new arrival with little nostril flutters of her own, was acting strange!  With a suddenly strutted udder, she walked around the baby and Dee and dropped down.

AH! Another one in labor in the middle of the day!  Ruby in a matter of a few more minutes was making sweet sounds to her own stunningly handsome black and white tobiano colt. And I was so “unneeded” with no time to do anything but grab a camera and leap for all the joy that can be leaped for by a horse lover with two brand-new baby paint ponies only about 24” tall!

The reality of having witnessed a unique, almost miraculous circumstance was not lost on me. Two mares had foaled within a few minutes of each other

Ruby with newborn "Galloway", 2004 within a few feet of each other!  The day was beautiful, sunny, blue skies and the backdrop of primroses, deep and light greens of spring was both glorious and memorable.

Rebekah with little sister Mary and a new foal, 2004As I looked on at the lovely scene before me, I was overcome with the reality the Lord had “lowered the waters” for me. These mares were due several weeks apart. I had never heard of two mares delivering in the middle of the day, full sunshine and out in the open and rather socially! Neither had my veterinarian who I wasted little time in telling of this wonderful delivery! No, the Lord had not let me fail. Instead, He got it all worked out for me and had it all taken care of before I could do a thing. He also gave me a gift and did something that meant something to me.  I loved being the first on the scene to witness the new little one. He reinforced that He knows me in a special way. No—I refuse to believe this circumstance was by chance. It was by His appointment I didn’t miss that quick foaling by the typical noon tradition of eating a sandwich. In a course an hour, all my dread, worries of inadequacy were overshadowed by the joy of new life and a real understanding the God who created me and endowed me with this love of horses really did something for me—Me, Rebekah—very personally.  It was done in a way not asked for, but a real, delightful gift that gave both peace and tremendous delight. Photos were snapped and snapped to capture these fleeting, special moments of spindly new legs learning to bear weight (Brownie and I had to race back to the house to get me little 2 MP digital camera and a few excited siblings!).

“Dusty” and “Galloway” certainly grew to be rambunctious, fluffy colts. They were a delight to watch grow. Around Christmas, together they headed up toward Oklahoma to charm a big Indian family with extended families of youngsters.  The following years, Ruby and Dee returned to their uneventful, nocturnal traditions of foaling leaving me to still hover through the night while they just went through motions like pioneers. 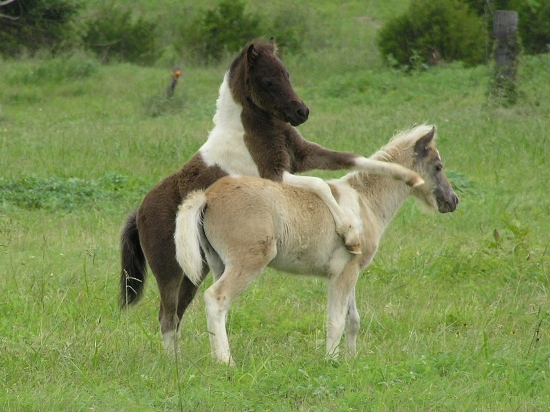 Galloway and Dusty playing away! 2004

To some, it may not seem like much. But for me, Ruby, Dee, Dusty and Galloway were just a few pretty little horses that God used to express His love for me in a special way and provide a tangible, lovely reminder. God certainly used a horse. ><>