Roaming Stripes: Zebras in the Wild

Posted by Firn Hyde on Monday, 15 September 2014 in Creation vs Evolution

The iconic zebra; a strange-looking creature, instantly recognisable even to people living continents away from this species’ natural habitat. These comical beasts are made distinctive by their striking pattern of stripes. They seem ridiculously out of place in the tall, tan grasslands where they make their home.

But zebras, like all of us, were created. God designed the zebra to survive in its environment, and He gave it many features that enable it to thrive. Stripes included. 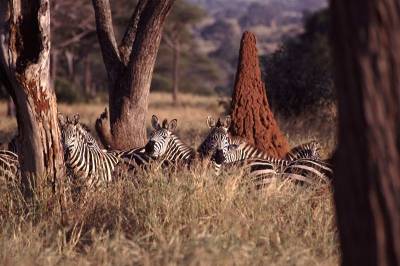 Zebras belong to the horse family (genus Equus), as well as donkeys, Przewalski’s horses and of course our own domestic horses. They range throughout the grasslands of sub-Saharan Africa, where they feed primarily on grasses but also occasionally browse bushes and trees. This is also the range of many large predators such as big cats and African wild dogs, which prey on foals as well as fully-grown animals. Zebras defend themselves against these predators by running away. Their outstanding eyesight, very similar to a horse’s, and efficiency in running aids them in this defence. When cornered, or in the case of a mare defending her foal, zebras will attack with hooves and teeth.

While there are variances between the species, in general zebras are around 13 hands high and weigh between 350kg and 450kg. 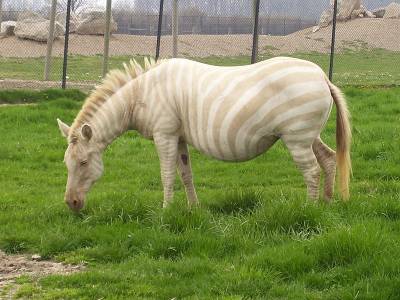 All zebra species have stripes, and most of them are black-and-white. Albino zebras, which are very rare and unlikely to survive in the wild, have cream-and-white stripes and young zebra foals have brown stripes that darken to black as they mature.

It has long been debated whether a zebra is black with white stripes or white with black stripes. DNA testing has eventually clarified that in fact they have a black base coat with the white stripes on top, similar to the genetics of pinto patterning in horses.

While the stripes appear comic and make very little sense to the casual observer, God’s genius and creative design is evident in them. They serve many important functions, not least being – surprisingly – camouflage. It may seem that a black-and-white striped animal would stand out like a sore thumb in tawny grass, but even from moderate distances the stripes serve to break up the zebra’s outline. Some plains zebras also have brown stripes between the black stripes, which serve to merge them with the grass. Zebras are difficult to spot in tall grass – harder than the solid black wildebeest or even the dark brown blesbuck they share their habitat with.

In a herd of fleeing zebra, the churning mass of stripes also serves to confuse a predator, making it hard for the carnivore to pick out a single animal and strike. Interestingly, this coat pattern has also been linked to repelling many large biting fly species. Studies have shown that the striped pattern is less attractive to flies than a solid pattern. This is important in Africa, where fly species such as the tsetse fly carry deadly diseases. 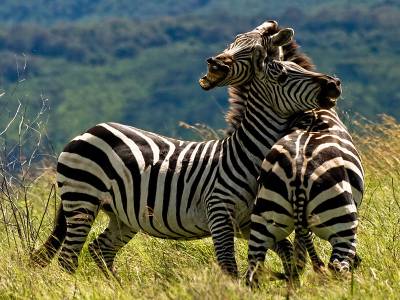 Zebras come in two separate subgenuses, Hippotigris and Dolichohippus. The Hippotigris subgenus consists of smaller, more horse-like animals; the plains zebra and the mountain zebra. The Dolichohippus subgenus has only one species, the Grévy’s zebra, which is larger and more donkey-like. 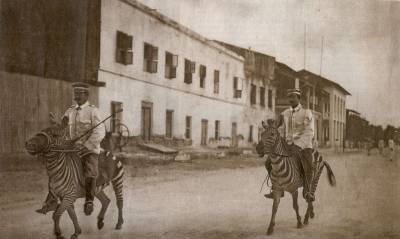 The smallest and most common zebra species is the plains zebra, Equus quagga. Of these there are six subspecies, one of which has gone extinct. The quagga, Equus quagga quagga, was the only zebra with nearly no stripes. A horse-like creature with a mostly brown coat and only a few white stripes on the head and neck, the last quagga died in 1883.

The other five subspecies of the plains zebra, however, are flourishing. Large numbers of them can be seen in many African national parks, such as Serengeti in Tanzania and Kruger National Park in South Africa. In South Africa, they are also kept and bred with great success on many game farms and private reserves.

Plains zebra stand about 11 to 14 hands high and weigh 175-385kg, with males slightly larger. Their social structure is very similar to a horse’s. They exist mostly in groups of a stallion with some mares and their young foals; colts and stallions without any mares form bachelor groups.

While zebras as a species have never been domesticated, specimens of the plains zebra have been successfully tamed and trained either to harness or saddle. In general, they are nervous, wild and tend to panic under pressure, so unsuitable for domestication. They were useful at some times as cavalry mounts in Africa due to their high resistance to African diseases that easily wiped out horses. 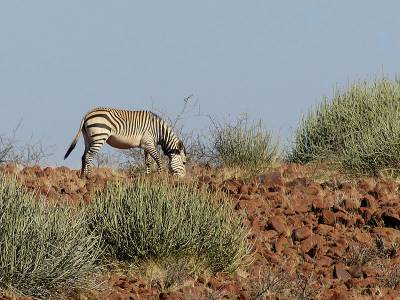 In the 1930s, mountain zebras were critically endangered, with only 100 individuals left. Successful conservation efforts have raised these numbers to just under 3000, but the mountain zebra is still classified as a vulnerable species. 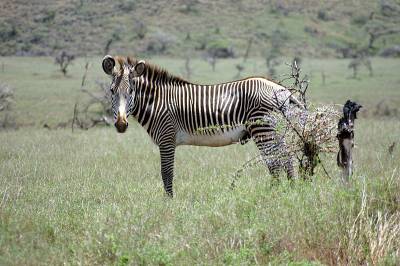 The only species of the subgenus Dolichohippus, the Grévy’s zebra is distinct from other zebra species because of its size and more donkey-like appearance. Like the mountain zebra, its stripes do not extend all the way over the belly, and it has longer ears than the other species.

The Grévy’s zebra is the largest living wild equid. Weighing as much as 450kg, it can stand sixteen hands high – larger than even most feral horses, and much larger than other wild equids. It is a northern-roaming zebra living primarily in Ethiopia and Kenya.

This species of zebra is made unique by its social structure, which is different to most equids. Grévy’s zebras do not form permanent herds. Mares will remain with their foals for about a year, and small temporary groups of mares with very young foals may be formed, but often they will roam alone. Stallions have territories that they will defend, but mares wander from territory to territory as they please.

The Grévy’s zebra is considered an endangered species. In less than 30 years, there had been a 75% decline in their numbers from about 15 000 in the 1970s to around 3 500 in the early 2000s. It is now a protected species in both Ethiopia and Kenya. Luckily for the zebras, they are quite easy to breed in captivity. Interestingly, a very successful captive breeding program has been conducted in Florida, USA, where over 70 foals have been born. 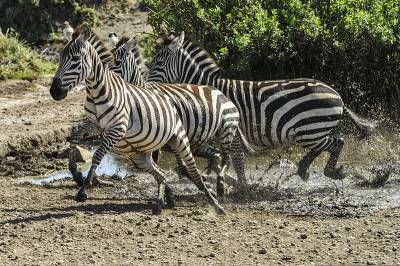 Who would have thought to give a beast stripes to deter the flies? God’s design knows no limits. His design of the zebra is but one small example of His creative genius and sense of beauty. When a herd of wild zebra charge across the grassland, splendidly striped and ablaze with power, one cannot help but admire the magnificent God Who created them. Indeed, He made the world, and it is good.