Posted by Firn Hyde on Friday, 26 December 2014 in Horses in Ministry 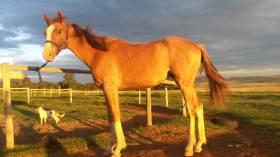 Today is my King's birthday.

He is older than time, but today marks the two thousand and fourteenth year since his birth. When He was born, a giant star lit the entire sky with the brightness of a second sun. Angels sang, shepherds worshipped, his virgin mother held him close, wise men brought gifts of value and the King of Kings slept in the hay.

Tonight, there is no star. I hear no angels. I see no shepherds. Mary is long gone. And I can offer Him nothing more than I already have: myself, a living sacrifice.

But tonight, the King does not sleep. My resurrected King reigns today in the glory of His majesty; He is the Alpha and Omega, the Creator of the world, Lord and Saviour, Everlasting Father, Prince of Peace (Isaiah 9:6). He governs heaven and earth, He is mightier than mighty, stronger than the definition of strength. As I worked in the sunset, He filled my mind, Christmas carols rising around me as I ran the bodybrush briskly down my chestnut colt's sleek golden coat.

I always find Christmas a little sad. That innocent Babe in the manger was destined to live a cruelly short life, to die a horrible death, the hands that healed nations punctured by nails, the lips that spoke truth and love to cry in desperation, “My God, my God, why hast thou forsaken me?” (Matthew 22:37) Of course, this Babe would rise again and reign forever. But I can't help but grieve a little knowing what my beloved Friend had to go through for my sins. I grieve, too, for Mary; Mary who sang her song to glorify the Lord that night, perhaps not knowing that in thirty-three years she would sob at the feet of the cross upon which her baby was slowly dying. As Simeon said to her, “A sword shall pierce through thy own soul also.” (Luke 2:35)

I am joyful, yes. Thankful, beyond so. But always a little sad. And my thoughts were with Him, rejoicing and thanking and praising and apologising all at once. I finished grooming the colt, untied him and turned him loose. The last rays of the setting sun had turned the world to honey as I set to work scrubbing out the feed bins and convincing the ageing donkey to move from his feeding pen back to his paddock. The donkey, like all donkeys, bears a cross on his back. Maybe it's just legend that donkeys have crosses ever since a little donkey colt that bore the King, or maybe He laid it there when He first made donkeys, marking His humble mount since creation.

My humble, beloved King. I ride a thoroughbred; bright as a sword's blade, aflame with his power, able to leap as high as I am tall and run like a winter gale. But my Lord rode a humble little donkey that had never been trained, a donkey colt no more than ten or eleven hands high, dusty with the desert sand. Lord, how You bless me more than You blessed Yourself.

As I turned, I saw it. The chestnut colt, inviting the thoroughbred to play.

The colt is only fifteen months old, but he's had a rough start. He spent most of his life in a little paddock, and – worse – some of it cooped up on stall rest for an injury, going stir-crazy with nothing to do and nowhere to move until eventually he just died a little inside. The flame inside every colt stilled, until his eyes were full of fear instead of fire. Two months ago, when I got him, the colt didn't know how to be a horse. He didn't know what he was. He couldn't function in a group; while the other horses grazed, he would stand in a corner of the pasture, nibbling hay instead.

Now, my socially impaired colt has made friends and ventured further, but something has still been missing. The colt had no idea of how to play. Where his peers were on their hindlegs sparring joyously in boisterous play-fights with their friends, he would just stand and eat hay. Even the older thoroughbred gelding would dance and strike at him, trying to get him to play, but the colt would just trot out of reach and stand watching. It was the one thing he needed that I couldn't give him; I fed him as best as I could, and gave him the space and company he needed, but without the free exercise of playtime in a group, the colt's legs would never grow up properly, would never recover from the injury he had suffered a few months ago. There was nothing more I could do. It was up to God and the thoroughbred to teach the colt to play.

The play session only lasted for a few more seconds before the thoroughbred wandered off and the colt began to contentedly graze beside him. But it was a start. My broken colt had finally learned to play, and I knew exactly Who was behind this discovery.

It was the most perfect Christmas gift. A little gift, perhaps. But it lit up my world.

I turned into the sunset, smiled and said, “Thank You, Sir.”

Peace on earth, and goodwill to all men.

Tagged in: Christmas gift hope in the Lord horses Thank You
Hits: 852