Posted by Firn Hyde on Monday, 05 January 2015 in Horses in Ministry 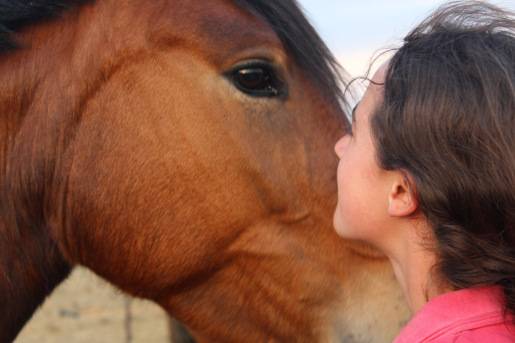 I always dislike giving a horse an injection. Even when I know that I'm just doing my best to care for them, I flinch just as badly as the horse does when I hold up the glittering silver needle. At least my bay gelding makes it easy for me. Shots often involve a couple of forefeet waving around my head, but Thunder has never reared in his life. I grit my teeth, rub his neck to make sure he is nicely relaxed, and push the needle deep into the neck muscle. He stiffens briefly, turns one of his giant, liquid eyes to look at me.

“It's okay, buddy. It's going to make you feel better.”

The gelding can't understand what I'm saying, but the tone of my voice reassures him. He gives a deep, low sigh and then relaxes. In a few seconds, the injection is over and I softly rub his neck to soothe the worst of the sting. Because his muscle was so relaxed, I know that in a few minutes there will be no pain at all, nor any soreness tomorrow morning. And in a few hours, the anti-inflammatory I gave him will have eased the mild lameness in his foreleg.

As I cover the needle and unbuckle his halter, I can't help but marvel at the way our horses trust us. We all know how nasty shots are, but we humans – at least after we're ten years old or so – hold still for our injections because we know they're for our own good. But Thunder has no way of knowing that the medicine will make him better. It would make logical sense for him to fight me when he feels the sting of the needle; I am supposed to be his herdmate, but I'm hurting him for no reason that he can understand. Yet I don't even need someone to hold him while I give him the shot. His lead rein just hangs loosely over my elbow while both my hands are busy with the syringe.

Thunder doesn't know what the sharp stinging pain is for, but there is one thing he does know: I am his leader, and in the four years of his life, he knows that I have acted for his good. Not in every situation – I am imperfect; man, not God – but in enough situations that the big gelding has decided that he can trust me. It only takes my voice or my touch to soothe him because I have become his safe place. He will let me hurt him because he trusts me to help him, and because he knows that I outrank him and therefore know better than he does what he needs to survive.

There is something for us to learn from Thunder and the millions of other horses that trust us. Just as humans cause horses a few seconds' pain in order to help them heal, God sometimes allows painful things to happen to us in order to bring us closer to Him and to the people He created us to be. A parting, a disease, an injury, a rejection, a loss – there is so much in the world that can hurt us. And pain is nothing to be ashamed of; Jesus Himself knew it well. He bled, wept and sweated blood. It's how we handle the pain that matters.

Some young horses will get up on their hindlegs and fight for their lives when anyone approaches with a needle. Usually they are the ones who have some bruising or swelling after the shot because their muscles were tense, or they jerked away and caused the needle to move slightly in the muscle. Sometimes it proves impossible to inject them at all and they end up having to suffer for longer with whatever injury or illness we are trying to cure. And many times we react in the same way to the tribulations we are subject to; we fight God, crying out against Him, demanding how He could possibly let this happen to us. In the meantime, He knows that this brief pain, this tempering of a sword in the fire, is only going to make us better, make us happier, make us stronger and nearer to Him in the long run.

God allows us to feel pain not because He hates us, but because He loves us and wants to heal us. If we will relax and trust His beautiful plan and make no attempt to fight against Him, then He will heal us and help us. Even the pain itself will not be as bad as it would if we fought Him. And He is there for us, to reassure us when we are hurting, to hold us close when we think we can no longer bear it. We are not stronger than we think. We are much weaker than we think. But the mighty God inside us is stronger than anything, and makes us unconquerable.

So next time we're hurting and we want to demand why He would be so unjust as to hurt those who follow Him, remember the bay gelding who stands so still to have his shots, and trust God. Relax, fix your eyes upon Him, and trust the King Who loves you. Glory to the King.