Posted by Rebekah Holt Derr on Monday, 14 March 2016 in Horses in Ministry 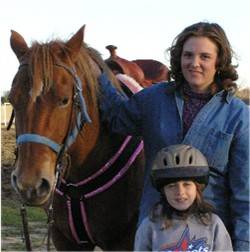 In a memorable passage of Job 39, God uses a horse (and a donkey) out of 14 mentioned animals as a reflection of God's own power and sovereignty.

God asked Job:
"Have you given the horse strength? Have you clothed his neck with thunder? Can you frighten him like a locust?
His majestic snorting strikes terror. He paws in the valley, and rejoices in his strength; He gallops into the clash of arms. He mocks at fear, and is not frightened; Nor does he turn back from the sword. The quiver rattles against him, The glittering spear and javelin. He devours the distance with fierceness and rage; Nor does he come to a halt because the trumpet has sounded. At the blast of the trumpet he says, 'Aha!' He smells the battle from afar, The thunder of captains and shouting. Job 39: 19-25

There is an ounce of God's majesty that is reflected in His creature, the horse. A poise of dignity, spirit of challenge and an embodiment of strength dazzles our eyes as we watch horses move at liberty. Even a pudgy "Old Paint," when suddenly spooked, looks almost regal with head erect, nostrils flaring and tail up!

Strength. Thundering hooves. Mocking fear. Galloping through hazards. Devouring the distance with fierceness and rage. Thinking back 15 years, many horses could fit that category in my repertoire. Yet one story stands out specifically of knowing first hand how such strength and "mocking of fear" was encapsulated in two completely different horses as we raced down a center line of a busy Farmer Market Road!

It was the year I turned 15. We lived about 8 miles between two small Texas towns. Our home was a quaint, old farm house we had remodeled. The little patch of acreage was just 10 acres but we were surrounded by the aromas of East Texan pine trees and rolling hills of Bermuda. I often rode along the wide shoulders of the Farmer Market Roads and County Roads in a 5-6 mile loop. Many a day Acey and I trotted a good 2-3 miles to ride on Mr. Sonny's thousand acre cattle ranch. Or I might just decide to use my key to the gate of the 800 acres I was give special permission to ride on, not too far from our home.

This morning, I had saddled up Acey for a good 6 mile ride. We were to be joined by Sugar and her owner Billy Jo to ride along the busy Farmer Market Road. The path had wide shoulders and very hilly. It was just the type of weather that made you want to soak in all the sunshine possible.

Sugar was Billy Jo's barrel racing mare. Though just one of many horses Billy Jo's family owned, Sugar was treated with a bit more care than the family usually gave their horses. On the whole, the family was negligent. Horse hooves were to grow to a point of altering locomotion. Much of their breeding stock needed to be culled. The facilities were unsafe, dingy and not maintained. Yet, somehow--despite these tremendous set backs--the family had been able to get their hands on a few well bred Quarter Horses and raise some talented performance horses. Sugar was by far the most beautiful horse they owned. Surrounded by rusting pens that were a hodge podge of portable panels, tarps, tires, old tin sheds and weeds, Sugar was certainly a diamond in a very rough setting. Yet her quarters were so cramped. All her pent up energy was funneled into a sour, grouchy "I will bite you" disposition.

On the flipside, Acey was perfect! With all the loyalty and blinded love that engulfs a first horse relationship, I held Acey as the model of perfection, a standard to measure all other horses by. She was a happy horse that seemed to enjoy living and giving much joy to my life. Looking back, my fascination with this horse wasn't too far from the truth. Despite Acey's apparent conformational flaws that led to her lameness that I am no longer blinded to, Acey was just a wonderful, all-around horse that was a gift from the Lord. No, she didn't flex at the poll--but I didn't know that was a big deal then and it wasn't needed. And we learned together and some my happiest memories and most adventurous dreams were on my friend Acey! 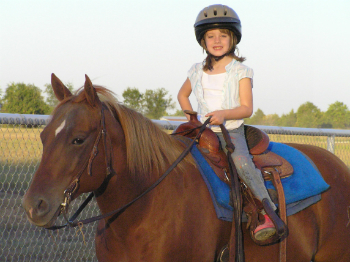 Acey with a riding student 2004But getting back to the story...

Acey and I trotted up the road to our rendezvous, Sugar was there in all her glory, ready to go, chomping at the bit, anxious to charge forward. Acey and I just ambled behind Billy Jo and Sugar for the first half of the ride, careful to be alert for spook hazards.

Billy Jo was confident in the saddle, little heeding the caution that my natural timidity always kept me from ever being too relaxed on the trail. Though Acey was "perfect" - she was capable of spooking at a surprise bunny or an unknown rustling in the woods.

It was uneventful. We talked about horses, watched the vehicles pass us by, drank in the sunshine and ambled along.

Relaxed more than ever, Billy Jo took her feet out the stirrups as we passed the residence of Duke and his wife Fancy. Their house pin pointed the last two mile stretch for our ride.

Duke and Fancy were a unique couple I knew only from a distance. Duke was a massive, muscular man a little later and crustier in life. He was a hairstylist and specialized in permanents and hair color for little old ladies. Thinking of the size of his hands, his towering 6'4" height and the rugged, western image he cut - it was the LAST thing you would have suspected. All I really knew about Duke was that he was a coarse beer drinking man who's only redeeming quality, I thought, was that he owned a fabulously conformed Quarter Horse halter bred stallion.

As Billy Jo and I walked past Duke's place, something in the bushes bolted -- and so did our horses. I was able to get Acey in check, but in the blink of an eye, Billy Jo was on the ground and her mare was galloping straight back the way we came...up the busy Farmer Market Road!

In my youthful ignorance, I sped Acey in the most hair raising chase, trying to catch Sugar, leaving Billy Jo far behind.

It was just like the westerns. All I needed was a pistol, bandana and a lariat rope! I was in a state of growing alarm. Sugar, who was running with all her might, would run out in the busy road, or worse, get out on the open Highway that was only about a 1/4 mile further north.  We could get hit! Or maybe she would just run away and never stop.

As the two horse race sped along, Acey and I were gaining ground on Sugar. She did take the dreaded turn on the Farmer Market road (though not toward the Highway) and I worked to stay on her tail.

Heart was pumping, hooves flying and cars were approaching. And Rebekah was praying audibly! "Help me Jesus!"   Acey just couldn't quite get up to the racing mare's speed, try as we did. And Sugar was as inspired for freedom as a released convict!

The race continued - straight down the middle of the center line--literally. Sugar was on the center line and Acey and I were right behind her.  We were

in a low spot and I never looked back - but cresting the hill ahead of us, I could see vehicles coming!

We couldn't head the mare off. Then we came to the rail bridge. Vehicles began to stop or slow down. Sugar halted at one point to rest while Acey and I, with a couple of men on foot tried to head off the escape mare. We thought we had her cornered.  Yet, she evaded all our attempts for capture and no sooner did I have hold on the rein--she took off like an escape artist.

By this time, I had worked myself up into a real panic. We were getting no where. I was worried about Acey. I was scared to death. And I was practically yelling "Help me Jesus" every 5 seconds at this point! Where we going to be hit by a vehicle? And what happened to Billy Jo?

Sugar shot uphill on the shoulder and I did too. Out emerged a truck with two men shadowing us along the road to help keep Sugar off road.

As the hot wind stung my face and I ducked through the trees, it dawned on me. Sugar was headed for home. And I had left Billy Jo far behind. We had now traveled at least 3 miles at a full gallop.  I was exhausted, my horse was exhausted. It was hot. I was drenched in sweat and Acey was so wet- it looked like we had taken a dive into a pond!

There was no use heading back. I needed now to get help for Billy Jo. The two men followed the us and the pace became a little less furious as Sugar continued to lead the way to her home. I jumped off Acey into the arms of Billy Jo's mom and in broken, tearful sobs let the family know what had happened. Billy Jo's brother sped off in his truck and I satisfied myself with a short, lusty cry.

Suddenly, my focus turned to Acey, my faithful little mare that was practically wheezing and dripping with perspiration. Her feet were tender and she staggered around as we walked her to cool her off. My mother had always told me that such a drastic impact on the horse and such strenuous, sudden activity could trigger laminitis and even break a horse's wind. We walked for a long time. Acey was stiff but her wind began to regulate and the rasping sound began to subside. I gave her several days rest and remarkably, she was no worse for wear.  Whew - that had me worried!

Bubba soon brought Billy Jo home. They were uncertain whether she broke her ankle or twisted it and were headed to the doctor for x-rays She had limped to Duke and Fancy's house and simply waiting for how it would all turn out. I would have thought she could have made a phone call! Incidentally, she had torn a ligament in her leg and had to wear a brace for a while.

My centerline sprint ended my rides with Billy Jo. But I did learn first hand how the flight of a horse truly is like what the Bible said in the book of Job: "He devours the distance with fierceness and rage!" The Bible, as always, had it right and very relevant.

I also learned later on in life that you make sure your people are the first priority. Check their safety. Yet, despite all blunders, it was evident the Lord had His hand on the whole situation.  And of course, one teen girl and two horses provided a completely free performance worthy of the greatest adventure ever seen on the Silver "B-Rated" Western Screen.