Posted by Firn Hyde on Friday, 31 October 2014 in Horses in Ministry 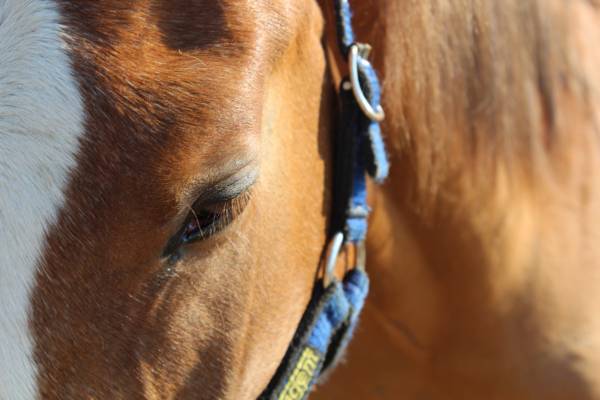 Only thirteen months old, the chestnut colt is already a horse – more than 14.2 hands – at my best guess. Neat little ears tipped towards me, he watches me as I approach him; a lanky mixture of curiosity and fear, awkwardness and grace. His long legs look too thin to hold up his powerful hindquarters. The impossible slope of his shoulder looks strangely out of place against his skinny baby neck, which is weighed down at the other end by the one part of him that glows with nobility; his head. The wide white blaze should make him look placid, but instead it only attracts attention to the perfect wide brow, huge bright eyes, tiny mouth, and chiselled features. His expression is the most contrasting of all. The pricked ears say curiosity, but nervousness gleams in his eyes.

I put my hand his neck; the muscle tenses as if he wants to flinch, then relaxes when he feels the gentleness of the touch. “It’s okay, buddy. I’m not going to hurt you.” Words that I will repeat over and over, because the chestnut colt has been mine now for seven days.

My first warmblood, the huge colt is bred in the purple and looks like it, especially when he drifts across the ground as if his already bulky frame weighs nothing. His flashy sabino markings make him even more eye-catching than he already is anyway, with his expressive face and the promise of reaching over seventeen hands. He was well bred, well raised and trained by my own instructor; it was no surprise that he was quickly snapped up by a lady looking for her next competition horse. It was just a freak accident that he injured his left hindleg. The resultant scar and worries about his soundness made him difficult to sell, and that’s how the beautiful chestnut colt became mine.

He looks at me nervously. I know my trainer has never hurt him, but he doesn’t know me and for a lonely baby in a new world, that’s all reason he needs to be afraid. He trusts me enough that I can catch him, lift up his feet and brush his face; in fact he is perfectly easy to handle, but a fear lurks beneath the obedience. I know that as soon as something frightens him, he’ll think he has to fend for himself and run: barring that, fight. I wish there was a way I could tell him that he doesn’t need to be afraid, that I won’t let anything hurt him, and will look after him now. But there is none. So I show him instead, with slow movements and gentle words, a soft touch and a strict leadership. The small terrors of a fly spray bottle or a rainy day don’t make him quite so panicky as they used to. And one day the tiny steps we’re taking now – getting him to stand still while I groom him, showing him that rubbing his ears is pleasant, not scary – will all add up when we face the jumps or the dressage arena. One day he will be not a scared colt, but a conqueror.

I run my hand up one of his ears; instead of flinching, he tips his head towards me, enjoying the caress. Little steps. 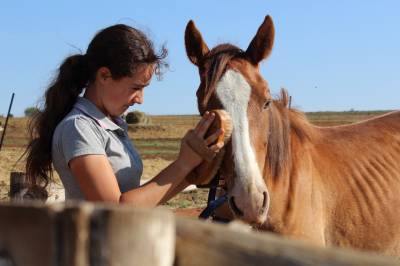 Every time I look into the eyes of the chestnut colt, I see myself. Join-up has been done; I will follow God, however tremulously, where He leads me. I will stand firm, with however much terror, when the storms begin to break around me. There are still things of this world that scare me, things that I don’t want to face even though I know He is bigger than any of them, that His love is stronger than death itself. But God knows this even better than I know it, so while I grow He holds me close and shows me that I can trust Him no matter what.

I can’t tell the colt that he can trust me, but I know God could tell me, if He so chose. Actions, however, are so much stronger than words that God doesn’t just tell me that I can trust Him – He shows me, day by day. While little tribulations come my way, He is always the one constant and unchanging reassurance, the One who never leaves me. I do not become stronger; I just realise more and more how strong He is.

And while today the knowledge of His strength only tides me through little trials – just as my colt can only handle small things, like back boots or a camera flash – one day I will know Him well enough that I could face the entire world and not be afraid. For in all these things we are more than conquerors through Him that loved us (Romans 8:37). 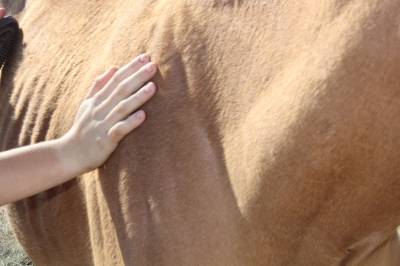