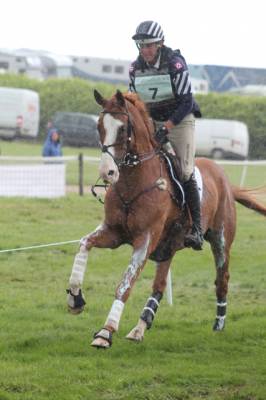 Photos from the public domain

True Prospect Farm, Memorial Day, 2011. The stables are on fire.

Boyd Martin sprints towards the flaming stable, his ears filled with the screams of burning horses. His world is chaotic with smoke and sirens. Firemen, family members, the barn owner – their faces blur as he staggers into the yard and stares. Nothing matters except for the fire, and the terrible shrieks of the dying horses inside.

Martin knows and loves those horses; he’s trained them, ridden them and competed on them for years as an international event rider, arguably the best in the USA. He spins around, looking at the charred and frightened horses that have already been dragged into the yard, and knows that many of them are still in there. The firemen are too mindful of the flames to do more than direct jets of water from the fire engines onto the burning stable.

But even though he knows better, Martin can’t just stand there. He dashes towards the fire. Firemen try to stop him, but his mind is filled with his friends the horses, and he shoves them aside as he staggers into the bellowing furnace that the familiar stable has become. Smoke clogs his lungs, sets his eyes to streaming; he throws up a hand to shield his face from the heat that starts to singe his skin. He can’t call out. He can hardly breathe. But he hears a gurgling sound nearby, a noise that barely resembles the breathing of a horse, and moves towards it. Careening into a stable door, he can barely make out the dark form of a horse through the smoke. He kicks the door open and stumbles into something muscular and living. Running his hands up the horse’s neck, his fingers find an anti-cribbing collar and instantly he is taken back nine years to the day he first set eyes on Neville Bardos.

Stables of Gordon Bishop, 2002. “This horse,” Bishop announces disdainfully, “is no good as a jumper.”

Martin doesn’t reply, watching thoughtfully as the horse moves across the arena with his long, gawky stride. He looks every inch what he is – an adolescent: only three years old, the gelding barely knows where his long legs end. Freshly off the racetrack, the chestnut thoroughbred stands a gangly 16.1 hands and none of them are working together. His rider tries to kick and pull him into order, but he just sets his teeth against the bit, flattens his ears and does what he wants, rolling a rebellious, white-rimmed eye. When he comes towards Martin, the long crooked blaze down his face makes his head look like the nose is on skew.

The rider tries to make him stop. The horse puts his head down and keeps going. The rider pulls with all his might, and eventually the horse flops to a halt with his head in the air, still rolling that fiery eye.

“No, no, no, and no!” the rider cries, jumping off the horse and tossing his reins at Bishop. “I’m not buying this.” With that, he stalks off.

“That’s it.” Bishop gives the horse a glare. “It’s the glue factory for you, Neville Bardos.”

Martin, who has been looking quietly into the horse’s eyes, says, “I’ll give you eight fifty.”

He nearly regretted spending that $850, too. At Neville’s first event, he’d thrown Martin’s wife, Silva, by the second fence and held up the course for fifteen minutes while they tried to catch him. He was hot and lively and opinionated; he had to wear a cribbing collar because he windsucked continuously. But with Martin in the saddle, things changed. By 2011, Neville had competed at many prestigious CCI**** events and had been shortlisted for the Beijing Olympics. Burghley Horse Trials in England, one of the toughest events in the entire equestrian world, was the next step. 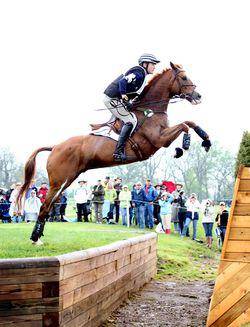 But here, in this burning stable, Burghley seems very far away. There is only smoke, and heat, and the terrible gasping rattle of Neville’s breathing. Martin tugs on the cribbing collar, croaking out encouragement, but the horse can barely stay on his feet, let alone walk. He sways where he stands, each breath sounding like it may be his last.

Then, out of the smoke, a pale face emerges: Olympian Phillip Dutton, Martin’s trainer and the barn owner. “Pull his head that way!” Dutton croaks, putting his arm around Neville’s chest. Martin pulls, trying to force his burning throat into forming words of reassurance, and Dutton urges Neville on. The horse takes a staggering step, then another. The two choking men and terrified horse reel down the aisle, leaning on one another, and fighting for every step.

At last the sweetness of fresh air fills Martin’s lungs and he lets go of the collar, letting Neville wobble away from the flames. Martin tries to go back to the stable for another of the six horses still inside, but smoke makes his head spin and he only just makes it back out onto the yard, where he sprawls on the grass and groans for air. Nearby, Neville Bardos stands with his legs straddled, fighting to stay upright. Later, vets will say that with the levels of oxygen in Neville’s bloodstream as low as they were, he should never have been on his feet; but on his feet he was, and on his feet he stayed as they rushed him to veterinary hospital. Martin would stand amazed as his horse continued to stand, to eat, to windsuck, and to fight for his life. 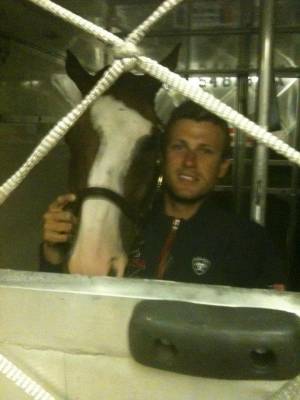 By the grace of God, no humans were severely injured. But six horses’ lives had been lost to the inferno. And for a while vets and trainers feared that Neville would become the seventh horse to die. His windpipe had been charred to the point of bleeding; just breathing was agony, let alone moving around. Martin doubted the horse would ever compete again, and gave up his dreams of Burghley, which would take place just weeks later.

But with the aid of a high-oxygen chamber, Neville healed at an astounding rate. Soon, boredom started to chafe at the horse’s nerves and Martin decided to ride him; Neville loved it, and improved at such a rapid pace that suddenly Burghley didn’t look so far away after all.

It wasn’t. Neville would go on to compete at Burghley Horse Trials in September, only seventeen weeks after the devastating fire. Not only did he and Martin compete, but they completed a clear round across country and ended up placing seventh overall. In January 2012, Neville Bardos would be named USEF’s 2011 Horse of the Year. It was generally agreed that this was a well-deserved accolade.

If this was not a true story, it would be deemed impossible for a horse so badly injured to bounce back so quickly and completely that he could compete at one of the most taxing events in the equestrian world. Neville was more than hurt, he was dying; it was enough to kill most horses, and it was fully expected that he would retire from competition. And yet months later he was as fit, strong, and well as he had ever been.

The success has been attributed to many things – Neville’s courage, the expert care of the vets, the oxygen chamber. And though these doubtlessly played a role, it was God’s amazing design of the horse’s system and the natural healing process that did the most. More than that, it was His plan. The Lord can do anything He chooses; nothing is too big or too hard or too unlikely for Him (Jer. 32:17). The healing of a sick horse is but a little miracle compared to what He can do. Today, Neville Bardos stands as a shining example of the fact that with God, all things are possible (Matt. 19:26).