Posted by Firn Hyde on Thursday, 17 April 2014 in Horse Sports 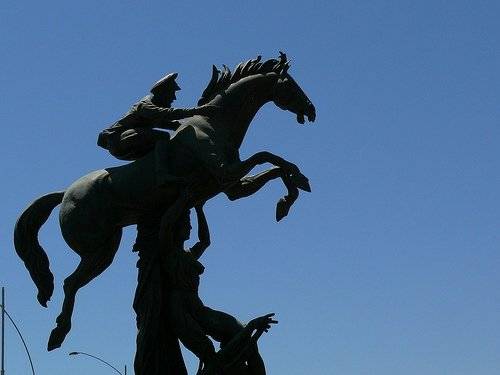 Stables of Chilean Army Captain Gaspar Lueje, 1947. The horse moved around the enclosure at a trot so nervous that his limbs jerked like something mechanical. Fear stole his grace. At every stride, his left hind leg gave an awkward little flick, a remnant of the injury that had left a puckered scar on his flank.

Faithful was good for nothing, and not even so good-for-nothing that he was in any way unique. Just another chestnut stallion, a racehorse wannabe who never had the speed, a dressage prospect who was too much of a handful; sixteen-one hands of bad habits and worse experiences, permanently on the verge of panicking.

The Army horsemaster paused in his casual stroll across the yard to watch regretfully as the horse proceeded at his clumsy gait, both ears pinned flat and one bad-tempered eye trained on the handler that stood in the centre of the ring. The bars all the way around were more than two metres high, and the horse moved so close to them that his ribs bumped against every upright. He was a sorry sight, the stereotype of the racehorse that hadn’t made it. He was a failure.

Shaking his head sadly, the horsemaster turned away to continue on his path. Then, behind him, a whip cracked. The sound snapped through the stumbling beats of Faithful’s hooves. The horsemaster heard all four hooves strike the ground in a staccato rhythm so fast that the horse had to be moving at a full gallop. He whirled around and stared as Faithful headed straight for the two-metre fence of the ring. The handler shouted, but it served only to egg the horse on; head thrown high, he plunged towards the fence. The horsemaster felt his throat tighten as the horse came too close to the fence to stop in time. He was going to try to jump it, but he would never make the leap; those long thin legs would catch the top bar and snap like matchsticks.

The horse was too afraid to care. Huge muscles bunched in his hindquarters, knees tucked up to his chest, and with his long neck stretched out, Faithful leapt. It was as if metamorphosis took place in a split second. The stumbling caterpillar of a stallion transformed, in a breath, into a floating butterfly. He jumped as if the ground was his own trampoline, sailing into the air with an effortless grace that squeezed the horsemaster’s heart. It lasted only an instant. Faithful drifted over the fence, struck the ground and became once again a panicking animal. He bolted, stable hands and trainers scuttling in all directions to catch him.

“Hey, boy!” the horsemaster shouted. A stable boy slid to a halt near him and saluted. “Sir!”

The horsemaster nodded towards Faithful, who was now shying from one side to the other as men shouted and waved their arms, trying to corner him. “Catch me that horse and fetch me his owner. I’m going to buy him.”

February 5, 1949. Viña del Mar, Chile. The tension was so great that the crowd was silent, staring into the arena, breath bated. They could sense that history was ready to be made as, in the arena, a lone horse and rider circled a single fence.

The crowd sized them up with a mixture of hope and pessimistic realism. At almost two and a half metres, the fence stood far taller than the top of the horse’s ears, a formidable slanting construction of solid poles so close together that they were difficult to see through, and taller than any horse on record had ever cleared.

If any horse looked fit to break the record, though, it was this one. Sixteen hands of pure muscle that moved with drifting grace, the horse was the colour of beaten copper. His coat caught the sunlight dazzlingly, mane and tail rippling as he ran. His rider moved with him as if horse and man were one body, directing the horse’s movements with tiny, confident touches of his hands and legs. Captain Alberto Larraguibel and the sixteen-year-old thoroughbred Huaso looked ready to take on the world.

And it was the world record they were after: to clear the highest fence ever jumped by horse and rider.

It was time. The Captain spoke to his horse, ran a hand down his neck, turned him towards the fence and urged him into a faster canter. Huaso’s strides extended, his ears pricked forward. He stretched out his neck and surged onwards, his rider crouched in anticipation for the leap, and at the last moment, some uncertainty wavered in the rider’s hands and Huaso hesitated. A breath away from the fence, he stuck his legs out straight and slid to a halt.

The crowd gave a collective groan. The Captain gripped his whip as if to punish the horse for the refusal, then thought better of it. He reached out and patted Huaso’s neck reassuringly. It was, after all, uncertain if any horse was capable of jumping that height; and yet the Captain believed that if any horse could, it was the brave stallion he rode.

“Come on, Huaso. We still have two chances left.” The Captain touched Huaso with his legs and the stallion strode into a powerful canter, circled once and came back towards the fence. This time there was no room for hesitation. The Captain tipped his weight forward, raised himself in the saddle, knowing that if Huaso stopped now he would throw his rider headfirst into the wooden poles. But Huaso rewarded his rider’s trust by trusting him back. He collected himself, stretched out his neck and leapt upwards with the effortless grace that the Captain knew so well. Adrenalin surged through the Captain’s veins as the horse sailed through the air for an impossibly long moment, tucking his knees right up to his chin – but as he came down the Captain felt a slight wavering in his hindquarters and heard the rattle as the top pole was rolled off. Huaso thudded down, and the pole came with him.

The Captain’s heart fluttered in his chest as Huaso circled once more for the final try. The crowd murmured; the air was tight with tension. Sweating and worried, the mighty stallion tossed his head and struck at the ground with his forefeet as if annoyed. The Captain soothed him with a hand on his neck, breathed deeply and made himself calm down.

They powered towards the jump. This was the last attempt. The Captain forced himself to be unafraid, to place all of his trust in the horse and his ability. “Now, Huaso!” At the right instant, Huaso tucked up his knees and floated into the air.

The moment seemed to last a lifetime as the poles flitted past beneath them and Huaso flew towards the apex of the leap. The Captain would not, could not glance down; the height was too terrifying, and he knew that at this moment he could not tremble. Finally, the edge of the jump, the ground below, Huaso stretched out his front legs, the Captain balanced his weight backwards and the stallion landed, throwing down his head and neck for balance, staggering forward, then gaining his momentum and cantering gracefully onwards with head and tail flung high.

There was absolute silence. The Captain had heard nothing fall, but his heart leapt with anxiety. He looked over his shoulder and saw the jump standing intact, the 2.47 metres that no horse had ever cleared before.

Then the noise erupted. The crowds pressed around them, flags everywhere, photographers, people laughing and cheering. It was a blur of sound and colour, and the Captain could not stop smiling even as he stroked Huaso’s neck to keep him calm.

At last, the peace and quiet of Huaso’s stall. The Captain slid off him and stroked the smooth red shoulder, leaving a white lather in the sweat on the horse’s coat. Huaso sighed loudly and shook his mane, relaxing.

“Oh, Huaso. You fine, fine creature.” The Captain patted the solid curve of muscle that was Huaso’s neck. “Who would ever have thought it? Two years ago you did not look like half the horse you are now.” He ran his hand down the horse’s side and across his flank, his fingers tracing the black, puckered scar. “But perhaps your old name did suit you better, didn’t it? Our new world record holder for the high jump… Faithful.” 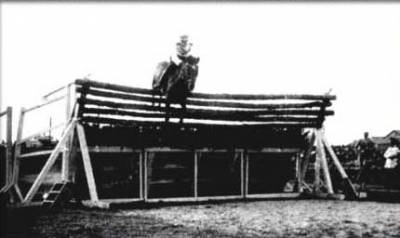 The true story of Huaso, earlier known as Faithful, the horse whose world record of 2.47m still stands sixty-five years later, serves to remind us that being thrown away doesn’t make something worthless. Huaso was a reject of the racing industry, a failed dressage horse; in fact, he even failed at jumping for a while.

But all it took was for somebody to see the beauty in him, to take him in hand and have the patience to train him and bring out the best in him, and the failure of a horse became a world-class athlete.

Many of us are much the same as Huaso. Broken, beaten down, tired of life and afraid of shadows. But there is still greatness in us, for the God Who made us all, made us all fearfully and wonderfully. And He knows what potential is in us and exactly how to make us live to our full potential and be everything He intended for us to be. If we can only be willing, trusting, obedient and faithful, He will make us into the best people we can possibly be. We can surprise even ourselves if we give our lives to Him.

Huaso and the Captain break the world record: