Posted by Firn Hyde on Monday, 11 August 2014 in Horse Sports 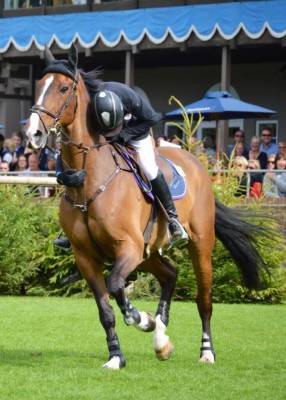 Photograph from the public domain

All flowing, fiery curves, the gelding charges across the grass, his ears pricked as the next giant obstacle looms before him. A solid wall standing 1.60m high, it’s a jump that would daunt most horses and petrify most riders – but not this one. The horse seems to take the height as a challenge, and his rider urges him on in the final strides before he tucks up his front legs and leaps. With a flick of his tail, he clears it with a grace that makes it look easy.

Spectators watch with bated breath, listening to the beat of the bay gelding’s hooves as he heads towards the privet hedge. He seems confident, his rider pushing him on and turning him sharply into the fence, but there’s a slight stammer in the rhythm of his feet and he jumps awkwardly. Horseflesh thumps on wood. With a rattle and a thump, the rail falls and the crowd groans. But for the horse and rider, there is no time for dismay. They’re headed straight for the Devil’s Dyke, a jump they’ve already knocked down once today. If they don’t clear it, the competition is lost.

The rider encourages his horse with every stirring of his legs against the gelding’s sides, desperate to make it, but the horse doesn’t hesitate. He tosses up his head and charges, the power of his strides screaming his refusal to make the same mistake again. Giant muscles bunch under his sleek coat and he leaps. Hearts stop, and for a moment the horse seems to float above the high rail over the ditch of water as he attempts to clear both in one leap.

The crowd roars. The horse plunges joyously away from the newly conquered obstacle and now there is no stopping him. Fence after mighty fence are left behind; he eats up the ground, swinging left, then right at the expert guidance of his rider. At last, he gallops through the finish and all eyes turn to the board where their time will be displayed: 85.17 seconds. 0.02 seconds faster than their closest competition. As the horse slows to a triumphant trot, his rider falls on his neck, hugging him, rejoicing.

Later, they stand in the winner’s circle, accepting the beautiful trophy that tells the world that Irishman Trevor Breen and the Belgian warmblood Adventure de Kannan have just won the British Jumping Derby, informally known as the Hickstead Derby, arguably the most prestigious single showjumping event in the world. Draped with flowers and showered with applause, the gelding stands proudly beside his rider. Every inch of him glows; his bay coat shines copper in the sun, muscles filling his outline with power. He is perfect in every way, except for one thing. As he turns his head from side to side, only one bright brown eye looks out of his noble face. On the other side, there is nothing – just a dark and empty socket where his right eye should be.

Interviewers ask Trevor Breen what it is that makes Adventure de Kannan so special. How did he become the first one-eyed horse ever to win the Derby?

Breen doesn’t miss a beat. “His heart,” he says instantly. According to him, it was Adventure de Kannan’s courage, will to win, and willingness to do anything his rider asks of him that makes him “a phenomenal horse, the horse of a lifetime”. Talented as he is, “Addy” would never have made it through all the setbacks that he did – losing his eye to surgery following an infection in 2013, an injured suspensory ligament not long afterwards, and a kick in the warmup ring only the previous day – without his inner qualities.

It is proven once again that it’s heart, above all else, that makes a truly special horse.

This is true not only for horses. How many of us know of people we deem more beautiful than we are? And upon what do we base our assumptions? We allow ourselves to feel inferior to people who are thinner or richer or better dressed than we are, people with the right hairdo and the right skin tone and the right job and the right education, without realising that we are all beautiful – fearfully and wonderfully made by the love of God (see Psalm 139:14). And it is more than just physical beauty or great circumstances that makes one special. For the Lord seeth not as man seeth; for man looketh upon the outward appearance, but the Lord looketh on the heart (1 Samuel 16:7).

Deeper things than beauty or opportunities make one special. Meekness, faith, gentleness, courage, kindness, hope, love above all – anything that is a part of Jesus’s perfect example to us – these are what really matter. The truest beauty of a human being lies in a redeemed soul filled with Jesus Christ.

Just like Adventure de Kannan, whose guts and generosity helped him to win the Hickstead Derby despite his scars, his handicap and the disfigurement of that gaping hole in his face, you can triumph over any obstacle that stands in your way, by the grace of God. He will fill you with everything you need not only to survive, but to thrive. Ask, and it shall be given you; seek, and ye shall find; knock, and it shall be opened unto you (Matthew 7:7). You can do all things through Christ, your strength (Philippians 4:13).