The Mini Adventures of Bek-Hur Part One 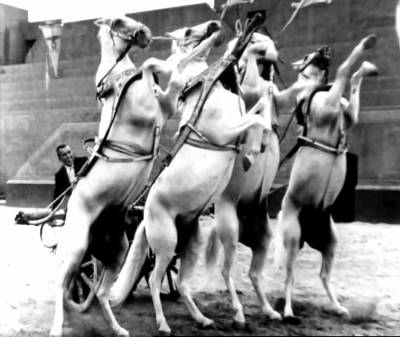 The Mini Adventures of Bek Hur?

Such a title could project epic imagery in Cinemascope with robust sinew and muscular brawn grasping the reins of four majestic white Arabs galloping perilously while harnessed to a chariot.

Reality diminishes glitter and dilutes cinematic splendor. The lights fade. The wallpaper on the props peel.

After all, folks...this is only a true story!

Setting: a hot East Texas day. Sun parched pastures edged with Black Locust, scrubby Cedars and the rugged Bois D’arc (pronounced in these parts as “Bowed Ark”) bordering the banks of a 60 acre pond with shimmering brown, murky water.  Maybe one turtle floating across the watery muck on a drifting Bois D’ arc branch. One skeleton of a formerly in the flesh bovine.

Cast: a melting, frizzy haired, wild eyed woman at times sitting in a cart and one diminutive Miniature horse pulling or at times lunging in the cart.

Ending: The storying will unfurl itself...you just have to read to the end...of the series, that is!

Introducing the “Her” of Hur

The opening scene of any true epic always provides some insight to the past. No great leading lady of any drama, no matter how trite, just "happens" on the screen without some preamble to her virtues of worthiness to such a showcase of distinction and preference in the storyline.  “I am the noblest lady in France, second only to the Queen…” is a direct quote from Singing in the Rain.

Even Shirley Temple, we were soon to learn after her first appearance on screen, had her misfortunes in the storyline to either be an orphan, or a penniless child, or to be overlooked for her obvious and blatant talent or just to be the unliked child that made everyone love her eventually by the end of the film (who could resist?).

Then there was Gene Autry’s leading lady in an exciting Saturday afternoon musical western. She was typically "Joan" or "Jane" or "Helen" and the heiress to a worthless uranium mine (so she was led to believe by someone in a black hat).  All the odds were against her but she soon met Gene.

It was through Gene’s winning, sincere smile...

-his plaintive, signature nasal rendition of a song of the west accompanied by his trusty guitar that was as readily available as his six gun sung to a stunned audience always present and available…

-a wild chase on horseback…

-and lastly, a few 12 to 20 rounds with his 6-shot Revolver he didn’t have time to reload while balancing for dear life on a wildly galloping Champion...

...we soon came to know that lady was actually a wealthy woman that had refused any number of marriage proposals from men in black or white hats, had actually an active uranium mine that also struck a vein of gold and was madly in love with Gene Autry who didn’t seem to mind or be shocked at the realization.

Bek-Hur was such a character that could never measure up to the aforementioned heroines. I’m afraid the heroine of this story is rather boring in comparison to most leading ladies when taking the stage (no pun intended).  She had no great slight or misfortune. Instead, she (that being me) grew in a wonderful home, and was well loved, well fed, well clothed, well-educated and was not slighted by the malignity of a near relative nor was she known to ever be capable of retaining an audience when attempting to sing as Gene Autry.

Simplicity at its best encapsulates the whole of Bek-Hur. No singing cowboys on the horizon nor uranium mines.  Just the west at its best with all the real trimmings -- entailing a hoof pick, rasp and a pair of knippers.  Horses of any breed were her passion.   Yet, a special preference for a horse of a short stature and a drive to train them to drive was soon the center of her whole youthful existence.  No, in comparison to most star studded “B” rated westerns—The Mini Adventures of Bek-Hur might have made the C-label –- not a tiered or even peer-reviewed grade in itself, but a “Condemned” rating. 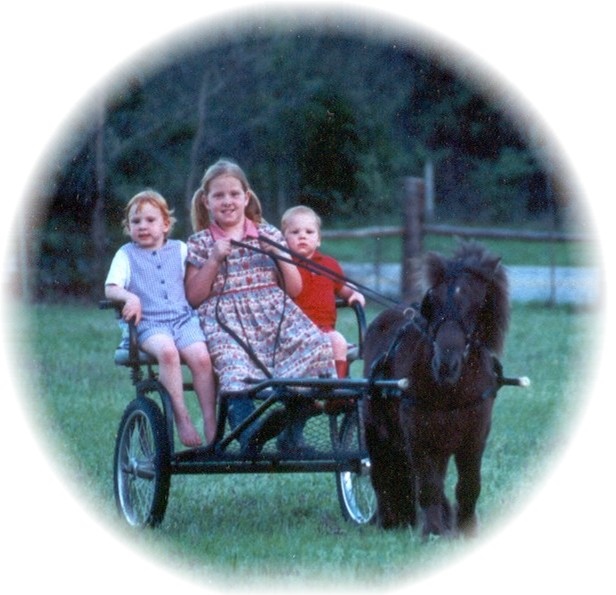 Brookside with Mary, Anna and Coleman 2001

My fascination with Miniature Horses began when I met Stormy, a Black Tobiano stallion about 32” tall. He was suited up in a patent leather harness and pulled a tiny sulky just big enough to seat an adult. With choppy precision, Stormy trotted around a “miniature” sized race track and won the roses. Once I sat in the sulky—I was hooked forever to harness, horse and cart.

I already had made plans to “grow up” to be a horse trainer but training cart horses was a fresh dream! At the age of 12 my first opportunity to train a Mini to a cart presented itself in the form of “Brookside”. He was only four years old, 31” tall and a dark chocolate brown with a tiny star on his forehead.  Despite being a half-brother to the mannerly Stormy, Brookside was a frustrated stallion arriving to our home with the ego of a vertically challenged Goliath.  Within the 24 hour period of his arrival to our home and the vet performing “brain surgery” (a.k.a castration), this little studly package had bit me and kicked at another family member! Poor prospect for a cart! I was ignorant enough not to worry. Brookside soon became a very contented, happy, lovable gelding and the model of all childrens’ horses. Never again did he use his teeth or hooves for evil. They were instead the empowerment enabling him to indulge in his favorite hobby—traveling to sample each available blade of grass that came within his realm. 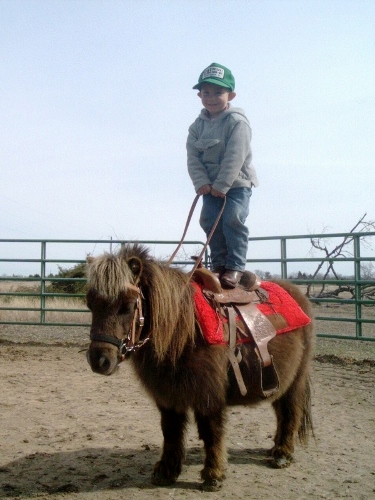 Brookside and Wyche 2004We certainly had the horse before the cart and harness. I learned some principles of training from a Miniature Horse breeder, a video, books, my Dad and hands-on.   While waiting to find the right cart and harness, I could no longer restrain the desire to get Brookside started.  Making a “make shift” harness out of hay twine, feed sacks and duck tape—Brookside tolerated my youthful endeavors toward teaching him to ground drive.  Soon, my Dad and I drove 2 hours crossing statelines to purchase a very affordable cart and harness... and the fun began!

Looking back, Brookside was a treasure that the Lord gifted our family with. He accepted the training of an adolescent trainer that took her job seriously and despite all that, he “somehow” survived and still became an ideal family horse. He started seven of my younger siblings in the principles of horsemanship. He was the little horse that taught me more about training.  Later as an adult, I used him in my horsemanship lessons.

The best adventures have yet to be told! :)

Rebekah L. Holt a.k.a "Bek- Hur" - In conjuction with the "God Used a Horse Series"

Tales from my Full Time Days Training Miniature and Shetland Ponies to Carts!