The All American Equestrian

Thomas Jefferson once described the qualities that only a few Americans know about George Washington:

“His person, you know, was fine, his stature exactly what one would wish, his deportment easy, erect and noble; the best horseman of his age, and the most graceful figure that could be seen on horseback...”1 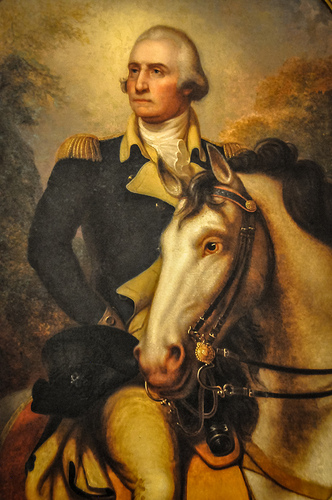 It all started at an early age. As a boy, George learned from his mother, Mary Washington, how to carefully manage and train horses.2 At the age of 17, he owned his first horse. Growing to be a proficient horseman, George’s methods of equine handling and training were later commended by Frenchman, Marquis de Chastellux:

“He was so attentive as to give me the horse he rode on the day of my arrival, which I had greatly commended. I found him as good as he is handsome, but above all, perfectly well broke and well trained having a good mouth, easy in hand, and stopping short in a gallop without bearing the bit. I mention these minute particulars, because it is the General himself who breaks all his own horses, and his is a very excellent and bold horseman, leaping the highest fences, and going extremely quick, without standing upon his stirrups, bearing on the bridle, or letting his horse run wild.”3

During the rigorous American Revolution, George Washington astride his warhorse was a symbol of courage to rally the troops. Like any horseman, George had a favorite horse to ride—one was named Nelson.

"Nelson,"… is said to have "carried the General almost always during the war [American Revolution]."Described as a "splendid charger," the animal stood sixteen hands high, and was a light sorrel or chestnut (reddish-brown) in color, with white face and legs…Thomas Nelson of Virginia, learned that Washington was having trouble finding a replacement for a horse he had been riding. As a result, Nelson sent the horse to General Washington in New York as a gift. Washington, in turn, then named the horse for his generous friend.4

Will you pardon a liberty I am about to take with you. I have been inform’d that you have had the misfortune to lose your favorite Horse & that you are not mounted at present as you ought to be. The Liberty I am about to take with you, is that of sending you a Horse that will suit you better than anyone in Am[e]rica. But then I must insist that he be accepted as a present, for his value cannot be ascertain’d. He is now nine years old and of most excellent qualities. He is not quite reconcild to the beat of Drums, but that he will soon be familiariz’d. I must again apologize for this liberty and beg that you will believe me with the greatest sincerity Your Obedt Servt

Washington and Lafayette at Valley Forge.

In gratitude for the gift of this “splendid charger”, George returned a note to Brigadier Nelson on August 20, 1778:

My dear Sir: In what terms can I sufficiently thank you for your polite attention to me, and agreeable present? and, which is still more to the purpose, with what propriety can I deprive you of a valuable, and favourite Horse? You have pressed me once, nay twice, to accept him as a gift; as a proof of my sincere attachment to, and friendship for you, I obey, with this assurance, that from none but a Gentleman. For whom I have the highest regard, would I do this, notwithstanding the distressed situation I have been for want of one.6

According to George’s adopted son, George Washington Parke Custis, Nelson was the horse General Washington rode when the British, under the direction of Lord Cornwallis, surrendered at Yorktown, VA in 1781.

The stately General was often artistically depicted riding a white horse.  Warhorse, Blueskin (sometimes spelled Blewskin) was George’s gray charger, yet another “gift horse” presented by Benjamin and Elizabeth Dulany of Maryland.  Washington utilized both horses during the Revolution, alternating the mounts to keep the horses in excellent health.7

After the war, Washington retired Nelson and Blueskin to optimum care at Mount Vernon.  According to John Hunter, a visitor:

"…we visited the General's stables, saw his magnificent horses, among them "Old Nelson," now twenty-two years of age, that carried the General almost always during the war. "Blueskin," another fine old horse, next to him, had that honor. They had heard the roaring of many a cannon in their time. "Blueskin" was not the favorite on account of his not standing fire so well as venerable "Old Nelson." The General makes no manner of use of them now. He keeps them in a nice stable, where they feed away at their ease for their past services.'"8 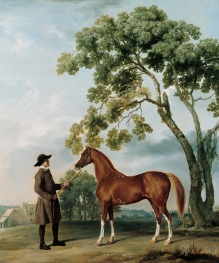 A Chestnut Arabian by George Stubbs circa 1700sMount Vernon was not lacking in horse flesh. George also owned one of the finest Arabian stallions in the new nation:

“Magnolia, or Magnolio, was an Arabian horse which GW had bought for £500 from the estate of John Parke Custis. He was a five-year-old, “a chesnut colour, near sixteen hands high, finely formed, and thought by all who have seen him to be perfect. He was got by the Ranger Arabian, his dam by Othello son of Crab, her dam by Morton’s Traveller, and her dam was Selima by the Godolphin Arabian” (Va. Journal, 24 Mar. 1785)”9

Royal Gift, The Knight of Malta, and a Presidential Muleteer

“Upon Washington's first retirement in 1783, he became convinced of the defective nature of the working animals employed in the agriculture of the Southern States and set about remedying the evil by the introduction of mules instead of horses, the mule being found to live longer, be less liable to diseases and require less food and in every respect to be more valuable and economical than the horse in agricultural labor at the South. Up to this period scarcely any mules were to be found in the Union. A few had been imported from the West Indies but they were of diminutive size and of little value...” 10

It takes both horses and donkeys to make mules.  But Washington was not interested in just breeding for any type of mule.  With already some of the finest horses in America—George’s vision for breeding mules required the acquisition of a Spanish jack.

A Mammoth Jack circa 1915Donkeys from Spain were highly prized.  They were expensive and their exportation was illegal without permission from the King.  For some time, George Washington had made attempts to request permission to purchase a Spanish jack.  It was not until 1784, that William Carmichael, the U.S. chargé d' affaires at the Spanish court, made Washington’s request known unto King Charles III of Spain.11

“As soon as Washington's views on this subject were known abroad, he received a present from the King of Spain of a jack and two jennies selected from the royal stud at Madrid. The jack called the “Royal Gift” was sixteen hands high of a gray color heavily made and of a sluggish disposition…”1213

During the same time, George also received another gift—this time from the Marquis de Lafeyette.

“Knight of Malta was a gift to George Washington from the Marquis de Lafayette in 1786, originally from the Mediterranean island of Malta. At the age of four, Knight of Malta was described in an advertisement as being from "the best Breed in the Island of Malta," and was "about Fourteen Hands high, most beautifully formed, for an Ass, and extremely light, active and sprightly; comparatively speaking resembling a fine Courser."”14

Importing yet another breed of donkey, Washington purchased a jack from the South American country, Surinam. He described the jack as "undoubtedly one of the best kind that could be procured.”15 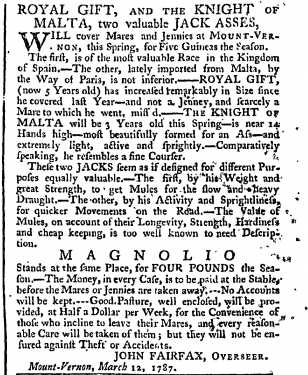 George Washington's Advertisement for his Jacks and Stallion standing at stud at Mount Vernon.

From Mount Vernon’s own stock, George had bred a prize jack he named Compound, a descendant of both “Royal Gift” and “The Knight of Malta”. To George, Compound was the perfect mixture between the Spanish “Royal Gift” and Mediterranean “Knight” jack stock. He just wasn’t for sale:“…money scarcely would have induced me to part with [Compound].”16

Mule raising developed into a successful venture for the Virginian farmer.  His mules were sought out and brought an excellent market value.  The stud fees for jacks were higher than that of stallions.17 There

was a growing demand for the working mule. In less than 15 years of careful animal husbandry, Washington had 58 mules working the fields at Mount Vernon.18  Due to his work to develop and promote the finest mules of early America, George Washington today also bears the title: The Father of the American Mule. “It is said that mules from Washington’s stock became the forerunners of mules that were the backbone of American agriculture for generations in the southern U.S.”19

From sea to shining sea, the name of George Washington rings with American patriotism. He helped form our nation by his actions, resolution, grit and reliance on Godly Principles.  Whether he was the finest public servant in the history of America or “the best horseman of his age,” George Washington’s contributions to the lasting success of the American equine industry are noteworthy for any generation.

George Washington is considered The Father of the American Mule for spearheading early American mule breeding for the benefit of America's farming industry.

17. The History of the Mule, The Mule Museum, http://mulemuseum.org/History_of_the_Mule.html, July 24, 2014 Return to Article