Horse Frightened by a Lion by George Stubbs (PD)

The most fascinating features of a horse are its senses: including sight, hearing, smell, taste, and touch.  These intricately developed senses serve as evidence that God has been at work in creating horses.  Job 39:19-20 serves as a reminder of this when God asks Job: "Do you give the horse his strength or clothe his neck with a flowing mane? Do you make him leap like a locust, striking terror with his proud snorting?"  While we consider the senses of a horse, let us keep in mind the Creator behind these senses. 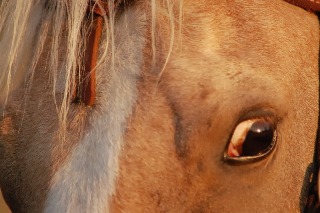 Photo by Rebekah L. Holt  There are many amazing facts about a horse's eyes that combine to create excellent vision.  The oval shape of a horse's eye makes the objects seen behind and to the side of a horse appear to be moving quickly.  This illusion causes a horse to move suddenly, an action known as "shying."  Their oval eyes are also huge.  In fact, the only land animal with larger eyes than a horse is an ostrich.1  Furthermore, a horse can do amazing things with their eyes!  For example, unlike humans, a horse can look in two different directions at once.  However, a downside comes with this ability.  Because the horse's eyes are placed on the side of the head, a horse has a blind spot directly in front and behind it.  Although a horse cannot see all the colors that humans can, it has nighttime vision and can perceive the colors blue, red, violet, and gray.2

The next incredible sense that a horse has is hearing.  Despite having the inability to hear certain low sounds that human can detect, a 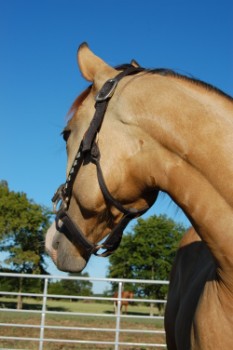 Photo By Rebekah L. Holthorse can hear higher sounds than humans can. This hearing continues for a long distance. In fact, horses can hear sounds that are 14,436 feet away.3  In comparison, most humans can only hear sounds 300 feet away and dogs only have the ability to hear sounds 1,320 feet away.4  It requires many muscles, ten in fact, for a horse to move its ear.  In contrast, humans only have three such muscles and most cannot use them.  Job 39:24 mentions the hearing of a horse: "In frenzied excitement he eats up the ground; he cannot stand still when the trumpet sounds." 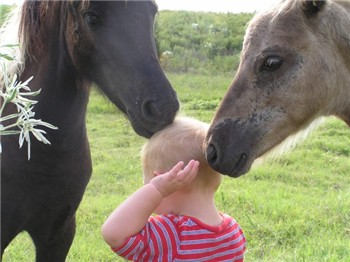 Photo by Rebekah L. Holt   Another sense, smell, is a wonderful aid to their survival.  In fact, a horse can detect smells that are 200 meters away.  This ability is mentioned in Job 39:25: "He catches the scent of battle from afar, the shout of commanders and the battle cry." Because of this high sensitivity, a horse becomes nervous when surrounded by dozens of new smells.  A horse's sense of smell has many uses.  It serves the purpose of identifying other horses.  For example, a mare and her foal identify each other by smell.  In addition, a horse uses its sense of smell to choose what to eat.  Because of its reliance on smell, strong wind and heavy rain can make a horse nervous because they impede a horse's ability to smell.  In order to aide this important sense, a horse has an organ that humans do not, called the Jacobsen's organ.  This organ traps smells, analyzes them, and sends messages to the brain about their source and meaning.5 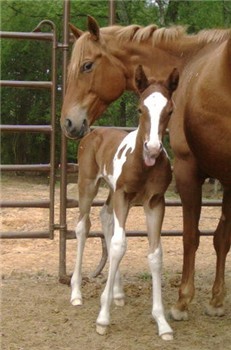 Photo by Rebekah L. Holt    A horse has an astounding sense of taste.  Taste buds that can detect sweet, sour, salty, and bitter aid this sense.  Although a horse has the same kind of taste buds as a human, the taste buds are located in a different place.  While a human's taste buds are on the front and side of the tongue, a horse has taste buds on the back of the tongue and roof of the mouth.  A horse's ability to detect differences in taste sometimes results in a horse being picky about its food.  For example, horses have been known to refuse to drink water that comes from a different stable, even when this water is just subtly different.  This problem is sometimes solved by adding a mild peppermint flavoring to the horse's water.  This same sense of taste means that a horse can have favorite foods, such as sugar and molasses.6

If you have ever ridden a horse, you have experienced the wonder of a horse's sensitivity to touch.  The reason a horse can respond to signals and reigns is its amazingly sensitive skin.  This skin senses changes in temperature, pressure, and pain, encouraging the horse to yield to the pressure of a rider.  James 3:3 refers to this attribute: "When we put bits into the mouths of horses to make them obey us, we can turn the whole animal." A horse's sensitivity serves for more purposes than just riding.  It 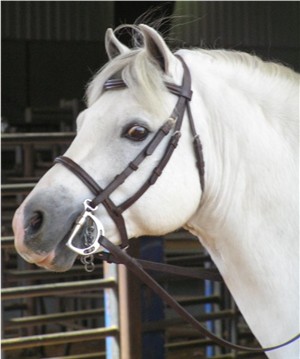 Photo by Rebekah L. Holt allows the horse to protect itself against parasites. I have observed a fly landing on a horse whose skin then trembles and the parasite flies away.  But the hide is not the only part of the horse that is sensitive.  A horse often uses its upper lip to touch things.  In fact, some horses have been known to open latches and carry buckets and brooms around the stable with their upper lip.7

3. Ref. 2 (Converted from Metric to English)

4. Science Fact Finder. The Animal World - Why Can A Dog Or Cat Hear A Whistle That A Human Cannot? http://www.enotes.com/science-fact-finder/animal-world/why-can-dog-cat-hear-whistle-that-human-cannot January 4, 2011 (Converted from Metric to English)