When God described His amazing creation, the horse, to Job, He spoke of it as a fearless, flashing creature, defiant in war and unafraid in battle. "The quiver rattleth against him, the glittering spear and the shield. He swalloweth the ground with fierceness and rage: neither believeth he that it is the sound of the trumpet." (Job 39:23-24).

And thousands of years later, in a little country at the foot of Africa, a new type of warhorse was born

It was somewhere between 1825 and 1830 when King Moshoeshoe of the Basotho first sat astride a horse. Immediately, the first Basotho king realised the strategic significance of the horse in battle. Perhaps, too, there was something in its grace and power that captured his majesty's heart; whatever the reason, by 1850, the Basotho were "a mounted nation".

Within a few decades, King Moshoeshoe's people had bred its own rugged type of horse, named the Basotho pony for its people. Descended from the famed Cape Horse – a breed of predominantly Barb, Arab and thoroughbred bloodlines, originally bred in South Africa's Western Cape – the ancestor ponies were captured from Zulu and Boers and rapidly introduced to Lesotho. This little country, huddling in the heart of South Africa, is thought to be the coldest country in Africa; its unforgiving and treacherous mountains are deadly to the unwary foot – or hoof. But the Basotho pony thrived. Its exceptional surefootedness, hardiness, and quality of hoof ensured that the breed prospered. 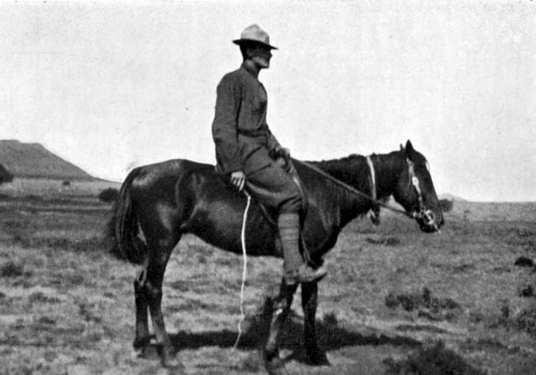 American Journalist, Howard C. Hillegas pictured in 1900 mounted on a Basotho pony that served in the Boer War.   Wikimedia Commons By 1870, Europeans were recognising the Basotho pony as a breed and when the

Anglo-Boer War spread its shadow across South Africa in 1899, they were in high demand. Their docility, stamina, and strength made them popular amongst the soldiers; with the added bonus that they hardly ever needed to be shod, the Basothos were ideal mounts for the soldiers of the gloomy guerrilla war that lasted until 1902.

These ponies bore little resemblance to the famed destriers of medieval times. Destriers were massively powerful horses of Spanish heritage, proud, fiery, expensive, and treasured. The Basotho pony was better known for its quietness than for its spirit, and more famed for its hardiness than its beauty. But though the war enhanced its quality, the breed paid the price: 30 000 of the horses were lost to the war, and the best stallions – even those that survived the battles – were gelded. The Basotho's glory days were over. Once so prized, the brave ponies went into a rapid decline; a blizzard in 1902, poor management practices, and the introduction of thoroughbred blood quickly decreased the quality of the breed. By 1952 it was evident that something had to be done to save the Basotho and so the South African Department of Agriculture started a breeding project on the No 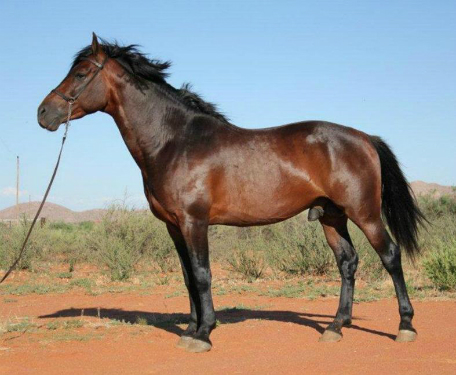 Eleven mares and two stallions were purchased from a pair of farmers; all the horses were of purest Basotho stock. The horses were selected for their excellent temperaments, such a hallmark of the Basotho breed, and the project had begun.

Over the next twenty-four years, daughter studs were established, a breed society was founded, and in 1976 the breed was affiliated with South African Studbook. As Arabian and Boerperd blood had been introduced to refine the Basotho pony, this new breed was named the Nooitgedachter.

Today, Nooitgedachters have much the same role as they played fifty years ago; they make excellent farm horses, herding cattle and sheep. Their hardiness and good hooves mean that they need very little maintenance. They are also popular as family horses because of their gentleness and size. 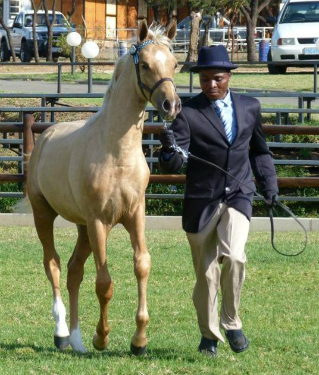 The Nooitgedachter is also a great show horse. Originally the breed's ideal height was around fourteen hands, with a limit of fifteen hands, but as the demand for show horses increased, the acceptable height was increased to sixteen hands. They have good temperaments for children, and compete in many disciplines including showing, dressage, Western riding, and showjumping, being especially popular for endurance. Still bred for temperament and hoof quality – Nooitgedachters are preferably never shod – the horses are each subject to an evaluation before they may enter the registry. Disposition and affinity with people is important and any horse with a poor temperament will be removed from the studbook.

Today's Nooitgedachter is a hardy little horse standing between 13.2 and 16hh. Predominantly grey or roan, chestnut and bay are also common, and black, dun and palomino permitted. This is an elegant horse with a refined straight or dished face; preference is given to a long, thick mane and tail. Most of all, the Nooitgedachter is reliable, levelheaded, and friendly.

Good show horses and good work horses as these are, the breed society takes care to emphasize the fact that owning a Nooitgedachter is all about the friendship between horse and rider. The proud stallion that God described centuries ago, pawing the ground and snorting, may at first glance bear greater resemblance to the medieval destrier than to the patient little pony that fought the Boer War. But the ancestor of today's elegant Nooitgedachter had its own share of courage. Like their riders, the African ponies had to do all their fighting in harsh conditions, with little or no stabling or concentrated feed. They ate the grass of the veld when they were hungry and turned their backs to the wind when it rained, and when they flung themselves into battle, they had to survive the gunshots of sin and folly cracking above their heads.

Something of that patient courage remains still in today's Nooitgedachter. And little as they are, light as they are, when a good Nooitgedachter flings himself at a big jump with his tail tossed high, you can almost hear God saying, "He is not affrighted."