The stallion is as white as innocence, a sculpture of gleaming muscles touched with a grace and energy as old as lightning. His hoofbeats blend with the music around him as he dances on the spot, every hair shining. Suddenly, he freezes, for just the shadow of a second. The world holds its breath. He lifts himself on his hindlegs, forgetting how heavy he is, defying the laws that hold him to the earth.  He rises, forelegs folded as if in prayer. He leaps. The white whirlwind of his power blurs in the air as he arches his neck in a bow of muscle, hindlegs lashing out with a sudden savageness that snatches breath.

His leap is as light as a locust's, he rejoices in his strength (Job 39:20-21), in the power and beauty that God has given him, and it shines out of him and into his admiring watchers.

This magnificent creature did not come flying from a fairytale, although he looks it. His home is not some flower-strewn glade in a hidden forest far from prying eyes. He is a Lipizzaner, a member of one of the oldest horse breeds in the world, so old and revered that it could be described as the royal family of horses.

Emperors and archdukes first bred Lipizzaners in the sixteenth century.1 With careful selection of courageous, intelligent, strong and beautiful horses, breeders slowly put together the dancing white steeds we know today. Lipizzaners, also known as Lipizzans, are small but powerful horses, usually standing between 14.2 and 15.2 hands high. For their size they are extremely strong and muscular, still retaining a refined look – an echo from their time spent as mounts for nobles in fashionable riding schools. They have long been bred for their temperaments; in times of war they were popular mounts for soldiers, selected for their courage and loyalty, and even now their intelligence and trainability enable them to perform the spectacular dressage movements that they are famous for.

Some would argue that the Lipizzaner is the oldest breed in the world, and with their ancestors traced back to Roman and Carthaginian 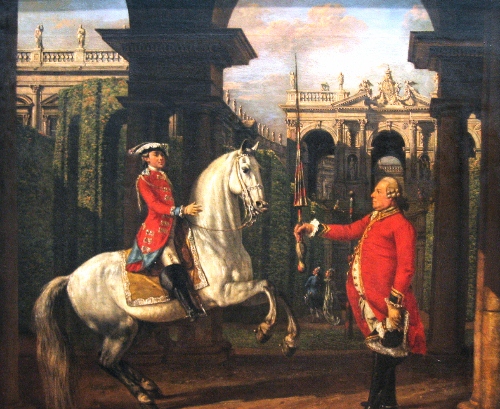 A Lipizzaner Performs the Levade, Painting by Cannaletto 1773, Wikimedia Commons, PDhorses in Julius Caesar's time, that is not surprising.2 The breed truly began in 1562, when Habsburg Emperor Maximillian II began to breed these horses for fashionable riding schools and military purposes. He crossed Baroque breeds like Spanish horses with Barbs, Arabs and the now extinct Neapolitan to produce a horse suitable for royalty. By 1580, Archduke Charles II was founding stud farms in Lipica, Slovenia, and the breed would later be named after this town.

Among the foundation horses of this breed, six stallions were especially prominent, and today all Lipizzaners can be traced back to these stallions: Pluto, Conversano, Maestoso, Favory, Neapolitano, and Siglavy. They were born in the years 1765 to 1819, and came from many different countries including Denmark, Austria and Syria. Surprisingly, though most Lipizzaners today are grey, only four out of the six foundation stallions were grey. Conversano and Favory were black and dun. There were also twenty classic mare lines, fourteen of which exist today. These first horses are remembered in the names of purebred Lipizzaners: they have two names, one for the sire's line, one for the dam's line, like Favory Modena and Siglavy Arva I.3

The S. A. Lipizzaners' story begins during December 1948, when Count Elemer Jankovic-Besan de Priber-Vuchin of Hungary, fleeing the advance of the Red Army, brought eight Lipizzaners to South Africa.4 Jankovic-Besan settled in MooiRiver, Kwa-Zulu Natal, with his two stallions and six mares. Three years later, the Count met a Polishman by the name of George Iwanowski and gave him a stallion to train. Iwanowski trained Maestoso Erdem to Haute Ecole (High School) level. 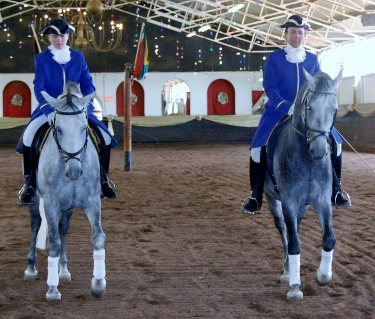 Women Riders Aboard Lipizzaners, Photo by Antoinette Middel   He ran into problems during the 1960s when he began recruiting riders for the performances. He did not have the means to pay his riders, and as such could not afford men of the right calibre. So he did what was at that time daring and almost unthinkable: he recruited women. To this day the S. A. Lipizzaners are trained and ridden by a group of ladies who largely owe their privilege to Major George Iwanowski. He died in 2008 at the age of a hundred and one, leaving an equestrian legacy behind him. In the same year, the Spanish Riding School hired their first female rider.5

Today the Lipizzaner stallions perform in an indoor arena constructed in Kyalami, Johannesburg in 1969. These stallions dance their way through a number of routines also performed at the Spanish Riding School, including the pas de deux, Airs Above the Ground and the famous Ballet of the White Stallions: the Quadrille. The Airs Above the Ground originated in times of war; the stallion we met at the beginning of the article was performing the capriole, a difficult movement designed to scatter infantry men. The Airs also include the levade, when the horse raises himself on his hindlegs, crouching so low that his body is at a forty-five degree angle to the ground, and the courbette, where the stallion rears up and executes several spectacular forward leaps on his hindlegs.

In South Africa these three movements are currently performed by, among others, the stallions Favory Presciana I, Maestoso Erdem and Favory Modena, respectively.6

It takes many years to train a young Lipizzaner. Work starts when the colt is three years old and arrives at Kyalamifrom the stud farm in Elandsfontein where he was bred. He works on a lunging rein for a full three months before the rider is introduced. As a four-year-old he is taught the piaffe, a controlled, energetic trot on the spot, and if he shows potential he will be taught one or more Airs Above the Ground. It will only be about seven years after his arrival that the stallion will be a fully-fledged Quadrille horse.

Most Lipizzaners are grey in colour, but when they are born, they are usually black or bay. As they get older and seasonally shed their coats they grow paler and paler until by the time they are doing the Quadrille they are ivory white. About one in every three hundred Lipizzaners will not turn grey but remain bay or black for the rest of its life. Two bay stallions, Conversano Arva and Siglavy Arva I, are amongst the South African Lipizzaners and take part in the performances.7

As Lipizzaners are very rare, inbreeding is a concern. The South African Lipizzaners were isolated for many years and as such the twenty broodmares at Elandsfontein provide a valuable gene pool for the Piber Stud in Austria, which breeds the Spanish Riding School's horses. Close contact is maintained between the two Lipizzaner schools; at present, the S. A. Lipizzaners are training with Bereiter Andreas Hausbergerfrom the Spanish Riding School. S. A. Lipizzaners Chief Rider Lillian Moller is responsible for much of the S.A. Lipizzaners' activities, which include weekly Sunday performances and special performances at Christmas, Valentine's Day and other holidays.

Over the past four hundred years, Lipizzaners have waltzed through our history, surviving the wars that threatened to drive the noble breed to extinction. Through it all theLipizzaners kept on, thanks to many dedicated horsemen and to God. He helped the white horses to prevail throughout the disasters that threatened to engulf them. Jesus says, "Are not two sparrows sold for a farthing? And one of themshall not fall on the ground without your Father" (Matthew 10:29).

A South African Lipizzaner, Photo by Antoinette Middel Besides God's love for all His creatures, He had another purpose in mind for the Lipizzaners. They are so astounding, such a gem in a troubled world that they touch one's heart in a way that one cannot understand, in a way that a mere accident of nature could never touch. Their beauty and effortless grace cry aloud of the glory and special creation ofthe living triune God.

Watching the white stallions, one gets the impression that they know they are being admired. They arch their necks and fling up their feet, tails held high in white waterfalls. All eight of them flow together in the Quadrille, shoulder-to-shoulder, heartbeat-to-heartbeat, ashining tapestry of drifting manes and rhythmic hoofbeats. Watching them, one cannot believe that chance blended flesh and fire so perfectly. How could these magnificent beasts have happened by sheer luck?

They didn't. A loving Hand sculpts every muscle in their bodies, every bone, every hair. A mighty Voice tells them to raise their heads, to live, to dance. These horses are living evidence of God and His glory; He made them, put breath in their bodies, allowed them to leap and float as if their half ton of blood and bone weighed nothing. How was this complicated, breathing machine put together, bone and muscle, skin and hair, and spirit? The body that can move so effortlessly is too wonderful, too perfect to be a mere chance event; but more wonderful, more perfect, more impossible to comprehend is that sparkling spirit dancing within the white stallions. Life is not a chance occurrence. These gentle, powerful creatures were made by God's Hand and His Hand alone.

They stand before the audience for a last time, applause fluttering down amongst them like petals of sound, their dark eyes shining, glowing with the life God gave them. God used the horse to prove His greatness to Job. He is doing the same thing to South Africans today.