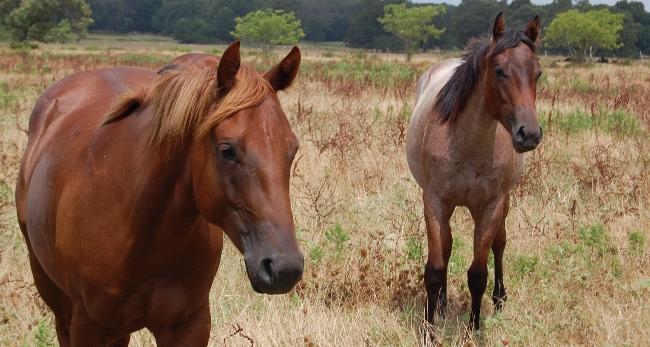 What About Horse Toe Evolution? 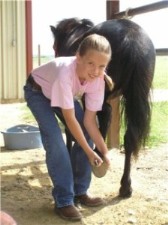 According to Darwin’s ideas on equine origins, the ancestor of the horse, millions of years ago, was a five-toed, fox-sized creature.1 Through random change, blind selection, and almost endless time, the original five toes fell by ones and twos, as the ancestors of the horse grew from rodent to equine.

Evolutionists teach that the hoof remains the sole toe of perfected horse evolution. The theory also proclaims that other existing parts of the leg, specifically the chestnut, the splint bones and the ergot, are all vestigial (leftover, useless) remains of horse evolution’s missing toes.

So what is the truth about horse toes? According to Genesis chapter 1, the equine kind2 was masterfully created on the sixth day. God in His skilful design made the equine and its foot like no other.

By studying each member of the ‘toe vestiges,’ we can discover fingerprints of the Divine Creator and gather evidence to refute Darwin’s false assumptions.

To study the equine foot uncovers a structural wonder which causes farrier, veterinarian, and layman alike to marvel. Here are just some of the tasks the hoof is designed to perform: 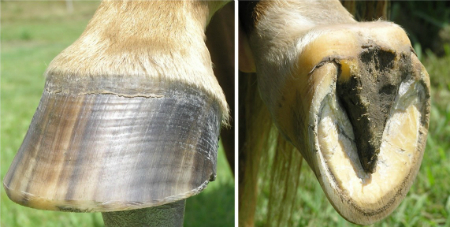 Imagine the horse’s hooves as suction cups that compress with each step to absorb shock while gripping the surface to aid traction. With each step, the inner structures of the hoof work like a pump, compress-and-release, shooting life-giving blood back up the leg and to the heart. Hundreds of microscopic, straw-like tubules serve to reinforce the hoof wall’s strength and draw ground moisture with capillary action to hydrate the hoof wall.

If even one part of the horse’s foot is out of place, the result is lameness, often chronic or painfully disabling.

Hailed as ‘vestigial’ or useless leftovers of evolution, splint bones actually are far from useless bits of bone. Splints are two icicle-shaped bones found on the back of each leg. They support the carpal joints (front knee) on either side of the cannon bone, and the tarsal (or hock) joints on the rear leg. In addition to assisting weight support, splints form a vital ‘groove’ and protection for ligaments and tendons that enable equine locomotion.10

‘The function of the splint bones is to protect the tendons and ligaments and especially the blood vessels and nerves which pass down the back of the leg. They also provide a greater bearing surface for weight by supporting a portion of the carpal bones of the knee joint. They are necessary, not vestigial.’ [Emphasis added]

Cases have been reported of multi-toed (polydactyl) horses with extended splint bones as extra toes.11 There are skeletons of horses with splint bones extending as two extra toes. Does this prove Darwin’s theory of a transitional creature evolving into a horse? Certainly not! It only illustrates that a totally equine skeleton had extra long splint bones supporting its fossilized leg that at one time supported a member of the equine kind. The modern equine’s regressing splints suggest only that the genetic material for extended splints has been lost. Regression, shortening or loss of toes, is not helpful to the progressive evolutionary theory, which requires an overall increase in genetic complexity. 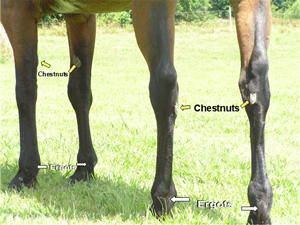 ‘Contrary to popular belief, they [chestnuts] do not represent the vestiges of missing digits.’12

Chestnuts are called the ‘fingerprints’ of horses; each is individual in shape and texture. They can serve as identification just like our fingerprints do.13

It’s largely believed that chestnuts are scent glands (llamas have such glands in a similar place, thought to make alarm pheromones). They carry the strong trademark aroma of ‘horse.’14
Photo note:  Chestnuts and ergots are unique to each horse and can be used for identification. The photos show chestnut and ergot variations of the forelimbs of three American Quarter Horse mares. The mare to the far right did not have an ergot growth—these, and chestnuts, are commonly absent in all breeds.

The ergot, a small, bony growth located on the back of the fetlock joint, is considered the last of Darwin’s missing horse toes. It too is taught as a vestigial leftover of the evolving horse series. While the ergot may seem to be a useless little bump, it actually is an anchoring point for the ergot ligament—the most superficial (close to the surface) of the ligaments found on a horse’s leg.15

A recipe must have a chef, a portrait must have a painter, and a creature must have a Creator. As Christians, we can rejoice that humans and all other creatures are not remnants of thoughtless evolution, but creatures skillfully designed by our Lord and Creator.

As Revelation 4:11 declares, ‘Thou art worthy, O Lord, to receive glory and honour and power: for thou hast created all things, and for thy pleasure they are and were created.’