The Non Evolution of the Horse

Probably no animal has been as important to human history as the horse. Before the steam and petrol engines were invented, they were the fastest form of transport on land. Their use by messengers and soldiers has turned the tide of many a battle. And they have many other uses. Several cultures drink mare’s milk; and horse hair is used for violin bows, mattresses and lining for clothes. Even their immune systems produce life-saving tetanus anti-toxin, while their manure is commonly used for fertilizer and was sometimes even used for fuel. Horsehide is made into fine cordovan leather, and glue is often made by boiling horse bones and cartilage.1,2 Finally, many people ride horses for enjoyment.

For the last century or so, this fine animal has been put to a more unfortunate use. Its alleged ancestry has been used as one of the key ‘proofs’ of evolution. It started in 1879 with the American paleontologist O.C. Marsh and the famous evolutionist T.H. Huxley, known as ‘Darwin’s bulldog.’ Since then, many museums and popular books have presented a neat series starting from the dog-sized, four-toed ‘dawn horse’ or ‘Eohippus,’ which supposedly lived 50 million years ago. The next creature is usually a larger creature like Mesohippus, which had three toes. The next one was larger still, for example Merychippus, which had two of the toes smaller than the third. Finally, there is the large modern horse, Equus, with only one toe, while all that is left of the other two are ‘vestigial’ splint bones.3 Some of the diagrams also show trends in tooth changes, with increasing hypsodonty (high-crowned teeth). This is supposed to demonstrate a change from browsing on bushes to grazing on grass.

How clear-cut is it, really?

As the biologist Heribert-Nilsson said, ‘The family tree of the horse is beautiful and continuous only in the textbooks,’4 and the famous paleontologist Niles Eldredge called the textbook picture ‘lamentable’5 and ‘a classical case of paleontologic museology.’6 As shown in a detailed thesis by Walter Barnhart,7 the horse ‘series’ is an interpretation of the data. He documents how different pictures of horse evolution were drawn by different evolutionists from the same data, as the concept of evolution itself ‘evolved.’

This especially applies to reconstructing the animals from fossil skeletons, which are usually very incomplete. The evolutionist Gerald Kerkut wrote:

‘It takes a great deal of reading to find out for any particular genus just how complete the various parts of the body are and how much in the illustrated figures is due to clever reconstruction. The early papers were always careful to indicate by dotted lines or lack of shading the precise limits of the reconstructions, but later authors are not so careful.’8

Informed evolutionists now realize that the picture, even in their own framework, is not a straight line at all. While they still believe in horse evolution, the modern view of the horse fossil record is much more jumpy and ‘bushy.’9 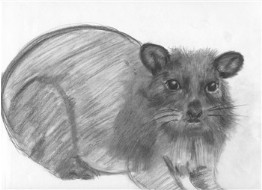 What is the Dawn Horse?

This creature was discovered in 1841 by Richard Owen, one of the leading paleontologists of the day, the inventor of the word ‘dinosaur,’ and a staunch opponent of Darwin. Owen saw no connection with the horse, but thought it was very like a modern-day hyrax—that is, a rock badger or coney. So he named it Hyracotherium. Other fossils of the same type of creature were later named ‘Eohippus’ or ‘dawn horse’ by more evolutionarily-minded paleontologists. But the name given by the discoverer takes priority. Thus ‘it is not clear that Hyracotherium was the ancestral horse’, according to Kerkut.10

The fossils do not carry signs saying how old they are. Their age is generally assigned to them, depending on their relative depth of burial. Those in the deepest rock layers have the greatest ages assigned to them. Based on the biblical framework, we should expect many, but not all, fossils to have been buried during the Flood, so the oldest would really be only about 4,500 years old. Fossils higher up may have been buried by local catastrophes since the Flood.

It’s likely that many of the horse fossils were post-Flood. However, even if we were to grant the evolutionary/long age dating, they don’t show the clear progression presented by the textbooks. For example, in north-eastern Oregon, the three-toed Neohipparion and one-toed Pliohippus were found in the same layer. This indicates that they were living at the same time, and thus provides no evidence that one evolved from the other. 11,12

Living horses come in a wide range of sizes. Their heights are usually measured in hands. One hand = 10 centimeters (4 inches). The largest is the English Shire horse, which can measure as much as 20 hands.1 Ponies are horses under 14.2 hands,1 and the Fallabella is just over four hands when fully grown.

Horses vary in other ways too. Modern horses can have 17, 18 or 19 pairs of ribs. Also, three-toed horses are known today. O.C. Marsh himself noted that some horses in the American southwest had three toes of almost equal size, ‘thus corresponding to the feet of the extinct Protohippus.’13

Also, much of this (created) genetic information may have been latent (hidden, i.e. the features coded for are not expressed in the offspring) in the original created kinds. They also had other controlling or regulatory genes that switch other genes ‘on’ or ‘off.’ That is, they control whether or not the information in a gene will be decoded, so the trait will be expressed in the creature. This would enable very rapid and ‘jumpy’ changes, which are still changes involving already created information, not generation of new information.

Applying these principles to the horse, the genetic information coding for extra toes is present, but is switched off in most modern horses. Sometimes a horse is born today where the genes are switched on, and certainly many fossil horses also had the genes switched on. This would explain why there are no transitional forms showing gradually smaller toe size.

It’s possible that body size and tooth shape were also controlled by regulatory genes.16 This is supported by an experiment by Paul Sharpe and his colleagues on mouse embryos. They found that a single protein, called BMP-4, inhibits the gene that causes molars (back grinding teeth) to form, so incisors (cutting teeth) can grow instead. Without this protein, no incisors grew.17

These mechanisms would explain the alleged horse evolutionary series as variation within the equine (horse) kind. The amount of variety within living horses, undoubtedly one kind, supports this.

Certainly tooth shape can vary widely within a kind, meaning that it’s unwise to assume that different fossil teeth show evolution.18 It is also unwise to be dogmatic about diets based on tooth shape. We showed this with bats,19 and recent evidence has overturned previous thought about ancient horse diets based on tooth shape. The evolutionary paleontologist Bruce MacFadden analyzed teeth from six horse ‘species’ (more likely, varieties within a kind), ‘dated’ at five million years ago.20

Previous evolutionary theories would have asserted that because they all had high-crowned teeth, they must have been grazers. But the amounts of stable carbon isotopes 12C and 13C impregnated into the teeth indicated that the horses were browsers, not grazers.

The researchers also claimed that once hypsodonty evolved, it was impossible to return to having short-crowned teeth again. In a creationist model, this suggests that hypsodonty is a highly specialized condition, which has lost genetic information for any other sort of teeth.

Again, this information loss is the opposite of molecules-to-man evolution, much like the long-furred bears in the diagram of Ref. 15.

Many evolutionists claim that the horse’s splint bones in their legs (see diagram right) are vestigial, that is, useless leftovers from its alleged evolutionary past. But the evolutionary zoologist Scadding pointed out, ‘vestigial organs provide no evidence for evolutionary theory.’21

He pointed out that the argument is unscientific, because it is impossible in principle to prove that an organ has no function; rather, it could have a function we don’t know about.22 Scadding also reminds us that ‘as our knowledge has increased the list of vestigial structures has decreased,’ and pointed out that the 19th century claim of hundreds has been shrunk to a handful of doubtful cases.23 Also, at best, vestigial organs could only prove devolution (loss of information), not evolution.

In particular, the horse’s splint bones serve several important functions. They strengthen the leg and foot bones, very important because of the enormous stress that galloping puts on the legs. They also provide attachment points for important muscles. And they form a protective groove that houses the suspensory ligament, a vital elastic brace that supports the horse’s weight as it walks. 24

The Horse Shows That Simularities Are Due To Creation!

Evolutionists claim that similarities in the limbs of frogs, reptiles and mammals show that they all evolved from a common ancestor. Amphibians (e.g. frogs) supposedly gave rise to reptiles, which gave rise to mammals, including bats and humans, hence the similarities in their limb structures. However, the horse’s leg doesn’t fit very well into this ‘explanation.’

The horse is much more similar to humans in other respects than a frog, but the frog’s limb is much more like ours. The evolutionist tells a story here to ‘explain’ this discrepancy: the horse is different because its legs became adapted to a different way of walking. This is ‘just-so’ story-telling, not science.

Perhaps the horse is part of the pattern God created to tell us there is one Creator (the similarities in living things) but that things did not make themselves (there are oddities which don’t fit any ‘everything made itself’ story).

Furthermore, the frog embryo develops its legs differently from us—amphibian digits develop by bud growth outwards, while amniote (reptile, bird and mammal) digits are formed as parts of a bony plate are dissolved in between. Yet they arrive at a similar pattern, again indicating the hand of a master designer rather than chance25(Romans 1:20). There really is no excuse. 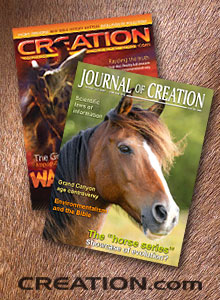