How Did We Get Chestnut Colored Horses?g>
By Jean Lightner, DVM

While we have much to learn about all the factors involved in producing the varied coat colors of horses, there are some steps that have been studied quite thoroughly.  At the surface of pigment cells (melanocytes) is a "switch", the MC1R (which is short for melanocortin 1 receptor). Its job is to wait for a signal, MSH (melanocyte stimulating hormone).  When the signal is received (MSH actually attaches to MC1R), it causes the cell to switch from making pheomelanin to making eumelanin.  This means the cell will now make the darker brown to black pigment instead of the lighter yellow to red pigment.

The MC1R is manufactured according to instructions found on a specific gene in the DNA of the horse.  Once in a while, something may cause the code to be changed.  This is called a mutation.  There is a mutation found in this gene in horses with the chestnut color.  This change in the code results in a different amino acid being used when the MC1R is built.  The final shape of MC1R is different enough that the messenger, MSH, can't attach properly to signal the production of eumelanin.  So chestnut horses are only able to produce pheomelanin and are a yellow to red color.

Mutations, which are any changes in the DNA code, can sometimes  result in serious or deadly diseases.  However, the mutation in the MC1R gene doesn't appear to have any serious effects on horses; it seems it only changes coat color.  There are even a few examples of mutations that are beneficial under certain special circumstances (e.g.  wingless beetles on a windy island or bacteria which can use an unusual energy source)   However, there are no examples of mutations which increase the complexity of an animal.  This means that mutations cannot explain how a horse or hair came into existence.  The pattern of mutations is to decrease complexity.  Notice that the MC1R mutation resulted in a MC1R that no longer worked as a switch.  This change committed the pigment cell to the production of pheomelanin. 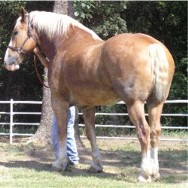 One of the World's Largest Chestnuts