Though the idea of Creator Godoutside the world of nature is unacceptable to the majority of evolutionists, the Bible teaches that eternal God created the universe, and He did so by and through and for His only eternal Son, the Lord Jesus Christ.  The eternal Son was there in the beginning of creation as can be seen in the plural pronouns of Genesis 1:26, "Let us make man in our image, according to our likeness."  That He, the Son, was instrumental in the creation of all things is taught in the Gospel of John:

Scientists say, "We have a problem.

There is not enough stars and moons and asteroids to hold the universe together."  This is called the "Missing Mass" problem.  Everything should be flying apart, but it is staying together.  A creationist can say, "I know what holds the universe together in spite of the 'Missing Mass' problem-the Lord Jesus, the Creator holds it all together by His great power" (Hebrews 1 and Colossians 1).  When the Bible refers to science, it may not be exhaustive, but it is accurate.  We can trust it.

When scientists choose to believe that God the Creator does not exist, they are forced to come up with alternative explanations.  They observe that our universe is holding it together.  They calculate that there is not enough mass to hold it together.  Now they have a problem, so they must make up an alternative.  In this case, the alternative I was taught in college in the late 50's was "invisible, cold, dark matter" holds the universe together.  I was also taught that neutrinos (called by some scientists as "the smallest speck of reality in the universe") had no mass. But the most recent alternative to God's power holding everything together is neutrinos.  It is now popular in some evolutionary circles to believe that neutrinos have so much mass that they hold the universe together, even though the mass of a neutrino has yet to be reliably established.

The Scriptures tells us that God holds the atom together and he hold the universe together.  The world came into being, not as a result of a chance, cosmic explosion, but as a special creation with a unique purpose.  God purposed to have people who would bring glory to Himself and with who He could have fellowship.  Ultimately, the Creator would step into time and His creation to become the Savior...

In the ancient Hebrew of the Old Testament, a word is repeated to emphasize it.  For example, Isaiah 6:3 uses repetition to tell us that God is infinitely holy: "Holy, holy, holy, is the Lord of hosts, the whole earth is full of His glory."  You cannot get any holier than God.  The Hebrew language uses the same word three times to show the total absolute holiness of God.  In a similar way, Genesis emphasizes the fact of creation.  Moses, under the inspiration of the Holy Spirit, writes:

"This is the book of the generations of Adam.  In the day that God created man, in the likeness of God made He him; Male and female created He them; and blessed them, and called their name Adam, in the day when they were created" (Genesis 5:1-2, Emphasis added). 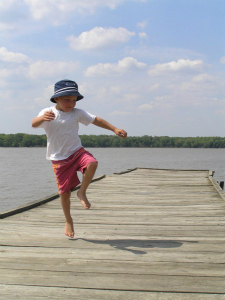 Man was created, created, created!  You cannot get any more emphatic than that.  The Bible does not say man evolved, evolved, evolved.  If God wanted to indicate that man had come about through ages of evolutionary changes, He surely could have.  But His Word is Truth and the Truth says man was created.  Mankind is not even Homo sapiens.  Homo sapiensis a man-made term that puts us into the animal kingdom.  We are created in the image of God distinctly above the animal kingdom to take dominion over the other life-forms on earth.

Not only did the Lord Jesus create man, He created man in God's own image.  Did God, who "spoke the creation into existence," have to use millions of years of evolutionary mistakes to finally achieve His own image in man?  Of course not!  The millions of years idea further detracts from God's omnipotence...

The Bible tells us that God created man in His own image as an instant creation (Genesis 1:27).  Jesus, the Creator, verifies this in Mark 10:6.  He states: "But from the beginning of creation, God made them male and female."... People, created instantly in God's image, were there in the beginning...

Special thanks to Dr. Jobe Martin for permission to reproduce portions of his book, The Evolution Of A Creationist on our website.  The following text is under U.S. Copyright protection.  Please contact Dr. Martin at Dr. Jobe Martinbefore reproducing this text.