Within horse breeds, a vast spectrum of size, coloring and body type exist to fulfill the needs demanded by humans and solve environmental problems.

Since the 1800s, it has been popularly suggested that variations we see in horses are an example of Darwinian evolution. This idea that mutations can increase genetic information to create new life forms (e.g. an ape-like creature changing into a man)...well…is this true?

The answer is "No!" What we see in the contrasts of horse breeds like the Miniature and the Belgian is variation within only the horse kind.1 Though one is small and one is large, Miniatures and Belgians are still just horses! Such diversity within a kind1 is not molecules-to-mare Darwinian evolution! ’s idea of evolution requires new and molecularly changed genes for new, evolving organisms to appear.

What about Natural Selection?

Evolutionists enjoy suggesting that “nature” is capable of programming such variety found in horses by Natural Selection. This popular phrase, Natural Selection, is often used among the scientific world to suggest that the acts of nature alone have shaped and are shaping life’s organisms. With this thinking, Natural Selection should generate stronger genetics through the death of weak or sickly horses (the survival of the fittest) and provide a pro-active source of new genetic mutations capable of improving or changing the horse into a “Whatever”.

While it is widely taught that the rigors of death, disease and the environment speed adaptation in life forms all over the world—this is neither true nor proof of ’s evolution theory. Environmental stresses neither favor nor disfavor one horse over another. It is the traits expressed by the horse which determines whether those stresses are favorable or not. The power for adaptation does not reside in the environment, but is solely innate to the organism.

Research suggests genes are multi faceted and capable of controlling more than one function. This “multi-tasking” can be achieved by genes “switching” on or off a function. Such an ability for genes to withhold or share their influence can account for much of the fascinating variety we see. All natural variation relies on “preexisting data” in organisms that is rearranged, modified or withheld—simular to building blocks being easily pulled apart and reshaped. According to scientist Dr. Alex Williams,

“…natural variation is not merely the passive result of mutations, as neo-Darwinists assume, but rather cells actively use random changes to produce useful new combinations of existing circuitry. Natural variation is thus built-in…without this built-in capacity for variation, a purely mechanical kind of life would break down at the first encounter with a mechanical malfunction. This is powerful evidence of design.”2

It is more praise worthy of our Creator’s amazing intelligence and even more consistent with scientific evidence to recognize that God programmed all life’s organisms to be compatible to more than one scenario. Scripture tells us that God has established the earth by His wisdom and understanding3--this wisdom and understanding is so evident when studying genetics and the ability for life forms to fill a niche. That horses or dogs or even people are genetically capable of adapting to the environment is not a mystical mishap. Properly labeled, the powers given to Natural Selection are actually God’s created innate intelligence within organisms!4

Life forms in a perfect world, such as the Genesis account pre-sin, would come preprogrammed with vast genetic coding allowing for variations. After catastrophic Biblical events, such as the fall of man, the entry of death and the Global Flood of Noah, the environment naturally has become harsher and the need to adapt more crucial for filling the earth.  The Bible tells us that our world is waxing old as a garment5, in other words, things are falling apart and growing old—no exceptions. 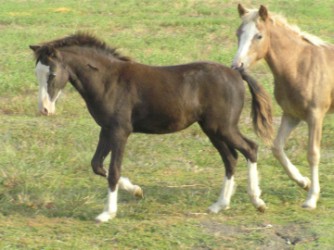 As seen in purebred horses, true human selection of genetics actually specializes or reduces the variation found in the gene pool. In other words, horses bred to the confinements of a certain type actually lost other genetic information for diversity. An example of this loss could be the American Shetland Pony. Though now considered modern and refined, the American Shetland originated from crossing the compact, chubby British Shetland pony to small Arabians and Thoroughbreds along with a selection of refined pony breeds to help “reshape” the pony’s image.6 Despite the American Shetland’s relationship to a full sized horse (the Arabian and Thoroughbred), American Shetlands are incapable of being bred “upward” within their breed to become full size horses. Once the genes are lost for full-sized horse height, ponies bred to ponies continue to produce ponies.

While some types of mutations attribute to variety seen in horses (or any other life form), they still are incapable of adding to the limits of kind, regardless of what the theory of evolution tries to enforce in our minds.

"Eeyore", an American Mustang, displays a unique mutation that obstructs vision-to-ear communcation      Many of mutations are hereditary and are passed down through the breeding stock’s foals. They are often devastating to the health of the animal.

A less detrimental product of mutation we observe on an American Mustang named Eeyore. Named for his ears’ resemblance to a cute story book animal, his ears are anything but “cute”—they are a serious handicap. While roaming the rugged, mountainous ranges of , Eeyore was noted for unusually aggressive behavior, such as charging at approaching strangers while other horses would instinctively flee the scene. According to an U.S. Department of Forest Services employee, Eeyore’s ears were the culprit in this volatile behavior. Upon veterinarian examination, it was discovered that this stallion’s low set ears conflicted with his field of vision. Unlike “normal” horses that can see directly behind them while still facing forward (eyes on side of head), Eeyore had to turn his head to look around. In addition, normal vision-to-ear communication7 was handicapped due to Eeyore’s inability to use his ears properly, making him a social outcast in thriving herds and more vulnerable to become prey to potential predators.

Simply put, Eeyore’s seemingly harmless floppy ears conflicted with his ability to properly communicate and they obstructed his field of vision. In the wild, this mutation made him more vulnerable to predators and ostracized him from socializing with other horses. Thankfully for horse lovers, Eeyore found a home with a patient trainer that was able to train him into a riding horse.8

While the mutant Eeyore’s story had a happy ending, most mutant genes cause devastating physical diseases or even death. Just about every horse breed has a syndrome (or disease) unique and specific to their breed caused by a mutation. Here are just a very few of them: 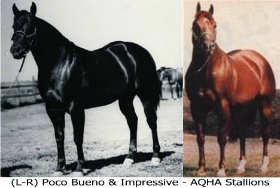 The world’s most populous horse breed,9 the American Quarter Horse, is noted for having two stallions that passed on a mutated legacy. Impressive, a top halter show horse, passed an incurable disease, HYPP to approximately 50% of his progeny. This condition causes infected horses’ muscles to contract in momentary paralysis due to a sodium channel defect in the muscular structure.10 Poco Bueno, the historically renowned sire of a cutting horse dynasty, has recently been traced as the genetic perpetrator of a fatal skin condition, HERDA.11  Skin is unable to adhere to the dermis (deep layer of skin), making it easily torn and separated from the deeper layer of skin and is almost incapable of healing. 12,13

The American Paint Horse breeders have to manage a devastating mutation called the Overo Lethal White Syndrome (OLWS). The cause of this syndrome has been traced to a mutant gene found in horses with overo color pattern or an overo horse family heritage. A Lethal White foal is born with no pigmentation in its skin and an underdeveloped digestive system. Research reveals that OLWS foals are deaf suggesting that the mutations within coloring also affect the auditory sensory system.14 Due to the dysfunctional digestive tract, all OLWS foals are humanely euthanized after birth.15

The Arabian has a ‘Lavender Foal Syndrome’ (LFS) where foals are born with a neurological disorder causing incapacity to stand at birth or walk. Arabian LFS foals are characterized by a pale coat color often the shade of light lavender. Most are humanely euthanized within a few days of foaling.16

The Truth Awaits Us

It may be popular in our generation to give credence to philosophical fallacies like Darwinian evolution; however, the truth about life’s origin, design and destiny is available for all who will choose to believe it.

The Bible tells us, “Ah Lord, God! Behold, Thou hast made the heaven and earth by Thy great power and stretched out arm, and there is nothing too hard for Thee.” (Jeremiah 32:17). It was an effortless act for the Lord to design all we see. How unlike the manmade evolutionary story that takes eons of blood, toil and turmoil!

As we look at the design expressed by life’s code of genetics, we catch a glimpse of the sovereignty of God. Our Creator not only created all life forms to exist originally in a perfect , but He equipped all organisms to be able to express traits enabling them to fill ever-changing environments. Death and disease was not His design but instead the judgment that came from mankind’s decision to rebel again their Creator.17 However, the physical destructive barriers of mutations, disease and death have not limited the Lord’s plans for our present or future.18 Believers in Jesus Christ rest in knowing that this present suffering world is not the end.19 Faithful Christians await the culmination of the Lord’s plan for earth when He will one day recreate a new world20 no longer tainted with mankind’s sin: the ultimate devastating spiritual mutation from the goodness of God.21 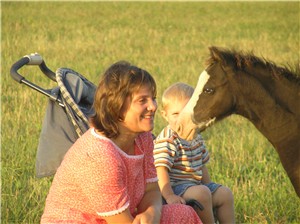 Horses serve as an excellent illustration of our Creator’s artistic, intelligent prowess and His loving provision of what we need. The horse is just one of the many gifts the Lord has given to enhance our lives.  While we can marvel over the complexity of design and the sheer majestic grandeur the horse embodies, our total praise should go to the Creator God Who designed this entire universe and its inhabitants for His pleasure and our benefit.

“Thou art worthy, O Lord, to receive glory and honour and power: for Thou hast created all things, and for Thy pleasure they are and were created” (Revelation 4:11).

So the next time someone tries to convince you that horses are just another product of hapless chance, give them the 4Ms—“Marvelous Mares Masterfully Made!”

1 . A Kind is an animal family capable of mating and producing offspring. Donkeys, Zebras, Przewalski horses, Horses and even Hinnies and Mules are all members of the equidae kind.