One Spark: The Story of Wolraad Woltemade 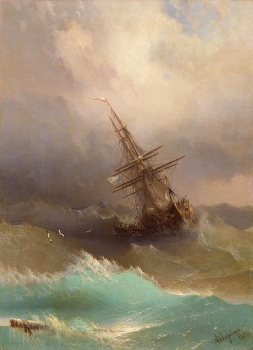 Screams filled the air and the hearing of the old man who stared in horror at a tragedy in the making. Screams from the men and women on the beach, throwing themselves towards the waves. Screams from the soldiers trying to stop them. And worst of all, the desperate, sobbing screams of the sailors on De Jonge Thomas as the relentless waves hammered their ship against the sandbank out at sea. Their cries were so terrible that they seemed to surf above all other noises to grab the old man's heart in an agony of fear and pity.

He pulled his grey stallion to a halt on the top of the sand dune, staring down at the storm-tossed bay. The wind was cold, but not as cold as the horror that blew through him. A huge hole had already been torn in the ship's hull, and precious human lives leaked out like blood from a vein.

The old man, fists clenched so tightly on the reins that his wrinkled knuckles were as white as his hair, wondered why the soldiers made no attempt to swim out and help the doomed sailors. But his knowledge of the area and sense of the sea told him immediately that the current from the nearby Salt River was stronger than any human swimmer, and that to swim would be both useless and suicidal. He knew that, in midwinter during a typical South African storm, you'd be lucky to drown. Hypothermia would kill those men long before the winds abated.

The old man's mind raced as he spurred his stallion, Vonk ("Spark" in Dutch), down the sand dune and onto the grey beach. He could see his son Christian amongst the rest of the soldiers, feel the weight of the pack of bread and cheese he had brought on his back, but above every sensation rose the hopeless yells from the dying men. Something had to be done. Anything.

Because the old man on the proud grey horse, Wolraad Woltemade, knew that he would not be able to watch two hundred men die one by one. No boat would make it out there in this storm; De Jonge Thomas was a strong, well-made ship constructed by Wolraad's own employers – the Dutch East India Company – and the wind and waves had torn it, anchor and all, across the bay and into the sandbank on which its remains now rested. Neither could any human being brave the waves. Wolraad looked down at the rippling muscles of his steed. For centuries, horses had gone where no man could have gone alone.

Perhaps this was one of those times.

The soldiers spun around at the yell of encouragement as Wolraad clapped his heels to his horse. Vonk sprang forward in a whirl of muscle and hair as grey as the sky and plunged fearlessly into the waves. Soldiers shouted and hands reached out to stop him, but Wolraad urged his horse on and Vonk's muscular bulk shunted them aside. In seconds, the stallion was swimming through the icy water, head stretched out, foam dripping from his jaws, his brave rider on his back.

"Go, Vonk! Go!" Wolraad urged, hands buried in Vonk's mane, as much encouraging himself as his horse. He could hear his son screaming behind him, calling him back, and part of him wanted to listen. He was one sixty-five-year-old man in the centre of a churning sea of towering waves. He was a dairyman, not a hero. But the sailors were dying, and their plight drew him on.

Vonk's powerful muscles strove on through the sea; Wolraad fought to keep calm. Once, a wave roared out of nowhere and crashed over the heads of both horse and rider.

Seawater burnt its way down Wolraad's throat, but he gave Vonk his reins and the stallion strove upwards, breaking the surface, spraying water from his nostrils, mane dripping down his neck like sea foam. And the ship was that much closer.

At last, they were under its lurking shadow, the broken spars stabbing into the grey sky like shattered bones. Wolraad coughed to clear his throat of seawater before shouting, hoarsely,"Two of you! Come over here and hold onto the horse's tail. Quickly!"

Wolraad barely heard the cheers from the soldiers as Vonk toiled back onto the beach, hardly waited for the two sailors to stagger onto dry land before wheeling the horse around and urging him back into the waves, spray flying from Vonk's trampling hooves. Two down. One hundred and eighty-nine to go.

Seven times the courageous pair rode into the deadly sea; fourteen men were dragged back to shore two by two. When the last pair had been seen safely home, Vonk was so exhausted that he swayed where he stood, sweat, blood and seawater dripping through his once-grey coat. Wolraad could hardly have been less weary. The cold had not been kind to his old joints, nor the drowning sailors to his gentle heart. It was for the brave horse's sake that Wolraad dismounted, knowing that a well-rested horse and rider would be better able to save more people.

Vonk had only taken a few easy breaths when a terrible sound rang out from the sea. An ear-splitting crack rose above the thunder, followed by screams and groans like a dying tree; worse still was the rush of terrified human voices that mingled with the creaking wood. Wolraad raised his tired white head and saw that the battered remains of De Jonge Thomas were finally falling apart; the wood to which the sailors still clung was creaking, shattering. There was nothing left to hold on to. Nothing but Wolraad Woltemade and a horse called Vonk. Wolraad slipped back onto Vonk's steaming back and urged him towards the sea. Weary as he was, the horse staggered back into the waves one more time and started to swim with the last dregs of his strength. Wolraad, huddled and shivering over Vonk's neck, tried to persuade his hoarse voice to shout encouragement to drowning men and striving horse. The men swam frantically towards them, desperate. Wolraad called out, tried to calm them, to tell them that he could take no more than two at a time, but the sailors could see death coming and they were afraid. Cold hands patterned with blue veins clawed and grasped at Wolraad's clothes, at Vonk's mane. Wolraad cried out to stop them, but the sailors were deaf from terror. Vonk tried to pull free, but a coughing, spluttering man lunged forward, staring eyes empty of everything but fear, grasping the stallion's bridle in both hands. Vonk's muscles flexed, but he had spent all his strength in serving. His head disappeared underwater; the sea bucked as if with savage glee, a great wave crashed down over them, and horse and men were lost to the heartless ocean.

Today every Afrikaner knows the story of Wolraad Woltemade1 , who saved fourteen men on the first of June, 1773 in painstaking pairs in that icy sea. Only 53 of the 191 sailors on De Jonge Thomas survived, and Wolraad was responsible for more than a quarter of them2. He was one man on a horse, one spark in the darkness, who made a lasting difference. He exchanged his life for those of the sailors he had never met before, walking into the maw of death so that others would not have to follow.

Wolraad's memory was well honoured. Just after his death, a ship was named Held Woltemade – "Woltemade the Hero" – after him. In 1970, the Woltemade Decoration for Bravery, followed in 1988 by the Woltemade Cross of Bravery, was instituted. These were sadly discontinued in 2002, but the statue of this selfless person and his trusted horse still stands in Woltemade Station in Cape Town. Wolraad's story reminds us of another selfless sacrifice, of another Man Who not only died for others, but offered Himself up willingly, knowing that His blood was the only thing that could save those less worthy, those that abused Him, those that He loved.

Source: Wikimedia CommonsJesus Christ, our Lord and Saviour, is God's Son3, but when He walked this earth He was still a Man4. He knows about fear, grief, pain, sorrow and loss just as we do, even though He knows and always knew exactly how everything was going to turn out. He was so afraid and distressed in the garden of Gethsemane the night before His trial and eventual crucifixion that He sweated blood5. And yet, when He emerged from the garden, He was solid in His courage. He could have crushed every enemy under His power. He could have wiped every man who spat on Him and abused Him from the face of the earth. Even at the last moment, He could have escaped from that death, easily.

He stood fast in the trial at the house of Caiaphas as He was mocked. He stood silent and noble as Pontius Pilate questioned him. He suffered the blows of the Roman soldiers. He carried the cross on his bleeding back up to the hill of Golgotha. He never struggled as they hammered His hands and feet to the wood. He hung on the cross for six hours until even He felt that God had forsaken him6. He died, and He lay dead for three days. And on the third day He rose again7 and spread the word, a perfect promise from a perfect God: His death was not in vain, nor His resurrection for no reason.

Our sins are all punishable by death, and by death they would all have been punished. But Jesus, the sinless, the perfect, took it upon Himself to do the dying for us. He suffered the sentence we deserved, and by rising from the dead, He not only removed our punishment – He added a reward. He allows us to live forever with Him in Heaven8.

We live by our love for the God Who is love9; and we live because He loves us. It is love that will stir a man's noble nature as far as self-sacrifice. For as Jesus says in John 15:13, "Greater love hath no man than this; that a man lay down his life for his friends." Jesus laid down His life for the world. All He asks is for us to lay our own lives at His feet, so that He can hand them back, so much longer and better and more beautiful than they were before.